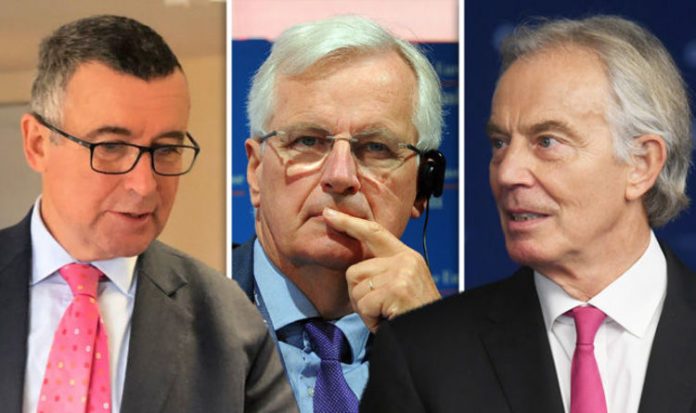 And former Labour leader and chief Remainer Tony Blair has also demanded the EU takes the initiative and offers the UK a good Brexit deal.

He told the Open Future Festival, organised by the Economist: “I think there is paralysis in the British Parliament, my view is they should make us an offer.”

This is a live blog, check back regularly for the latest Brexit updates.

The European Union should make Britain an offer over Brexit to put an end to the “paralysis” of the UK government, Tony Blair has said.

The former prime minister said Europe should step in when asked what the EU can do to help Britain break through its political impasse.

He told the Open Future Festival, organised by the Economist: “I think there is paralysis in the British Parliament, my view is they should make us an offer.”

MP Bernard Jenkin said the EU is ignoring an easy solution to the Irish border problem for “political reasons”.

Speaking on BBC Any Questions?, the MP said: “The EU refuses to discuss it, probably for political reasons. We want to be able to reassure them that a friction-free border in Northern Ireland is not a threat to the integrity of the single market which is what they fear.

“This could be done. Every solution that we put forward in our paper is practised somewhere in the world. There are virtually drive-through borders in Switzerland, EU, Canada, United States.”