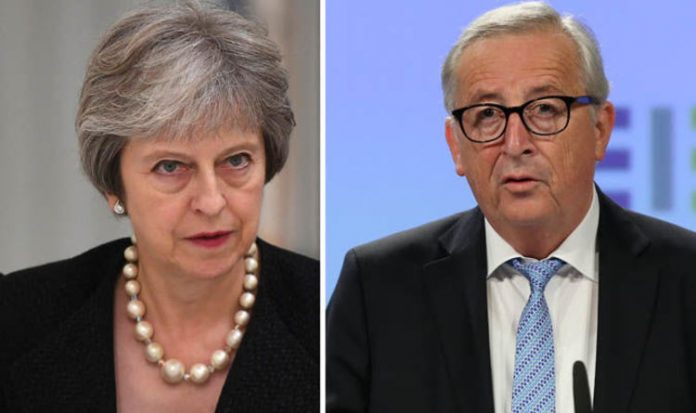 The warning comes as the European Commission’s Brexit negotiator Michel Barnier will make his conclusions on Theresa May’s white paper plan this afternoon.

The Prime Minister will address Brussels directly during a visit to Northern Ireland today – the first since the referendum – in a trip branded “too little too late” by Sinn Fein.

She will order the EU to move on rather than “fall back on to previous positions which have already been proven unworkable”.

Mrs May will also reiterate her refusal to contemplate any backstop deal that treats Northern Ireland differently from the rest of the UK.

But European diplomats, who today will meet to talk about Brexit, haven’t so far showed much excitement about the British white paper.

Michel Barnier, yesterday declared it was “a matter of urgency to agree a legally operative backstop”, saying: “We need an all-weather insurance policy.”

And tensions are rising within Ireland itself, as yesterday Irish prime minister Leo Varadkar suggested British planes could be banned from flying in Irish airspace.

REFRESH THE PAGE BELOW FOR LIVE UPDATES

08.00am update: Theresa May to urge Brussels to be more cooperative

Speaking at Belfast’s Waterfront Hall, the Prime Minister will say that following the publication of the Government’s white paper agreed at Chequers, it is “now for the EU to respond”.

She will add: “Not simply to fall back on to previous positions which have already been proven unworkable. But to evolve their position in kind.

He said: “The situation at the moment is that the United Kingdom is part of the single European sky, and if they leave the EU they are not and that does mean that if there was a no deal, hard Brexit next March, the planes would not fly.

READ  Crossrail map: What stations will Crossrail stop at, and which parts are open? | UK | News (Reports)

“If they want their planes to fly over our skies, they would need to take that into account.”

But his outburst received immediate backlash, with one Brussels’ official urging him to avoid “tit-for-tat”.

The official, involved in negotiations, said: “I don’t think it will happen. Ireland is very keen on having a withdrawal agreement. They are the most affected.

“Practically all lorry traffic from Ireland to the continent goes via England so it wouldn’t be a good idea to get into a tit-for-tat.”