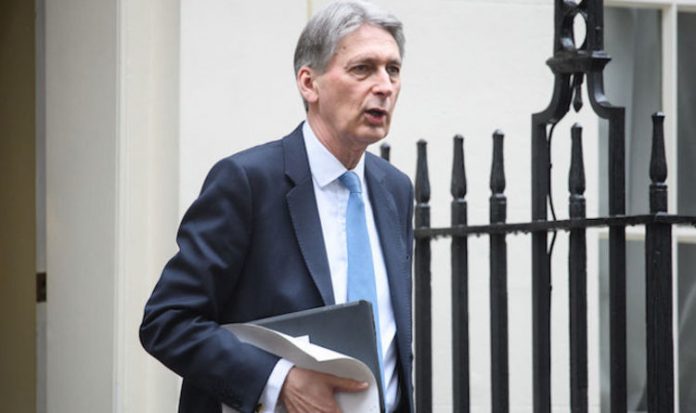 The Chancellor appeared to mouth the offensive comment in the direction of MP Andrea Jenkyns after she questioned Theresa May’s Brexit plans during Prime Minister’s Questions in Parliament on Wednesday.

Ms Jenkyns asked the Prime Minister: “At what point was it decided Brexit meant Remain?”

Mr Hammond is then said to have mouthed “stupid woman” from the front bench as a smiling Mrs May replied to Ms Jenkyns’.

Home Secretary Sajid Javid could be seen staring at Mr Hammond with concern after he made the jibe.

Ms Jenkyns’ fellow backbench Brexiteer Jacob Rees-Mogg said: “I cannot believe that the Chancellor would say something so rude – not only to Andrea but effectively to all Brexit voters.”

Ms Jenkyns, who quit her junior government role as a parliamentary private secretary in order to speak freely about Brexit, has since dismissed the furor over the comment, calling it “part of the cut and thrust of politics”.

Mr Hammond has previously been taken to task over his choice of language in the past.

In July 2017, he made comments about the lack of female Tube drivers working on the London Underground network.

He allegedly asked colleagues when they had last seen a female train driver, before pointing out there was no physical bar to them doing the job.

As he explained how simple the job of driving a train has become, he reportedly ended his comments by saying “even they can do it”.

His comments quickly evoked a response from the Prime Minister, who stepped in before he went any further.

As Mr Hammond attempted to clarify his statement he was interrupted by Theresa May, who said: “Chancellor, I am going to take your shovel away from you.”

And in the same year, he was rebuked after telling female Labour MP Mary Creagh not to be “hysterical”.