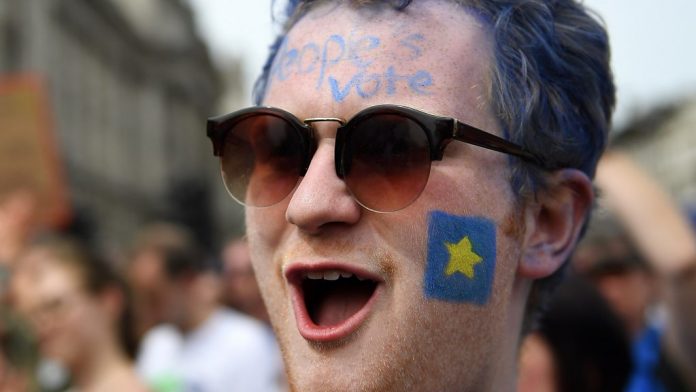 Tens of thousands of people have marched in central London to demand a final vote on any UK exit deal, on the second anniversary of the Brexit vote.

Organisers of the People’s Vote march say Brexit is “not a done deal” and people must “make their voices heard”.

It came as senior Cabinet ministers, including Liam Fox and David Davis, insisted the UK is prepared to walk away from talks without an agreement.

The protest is part of a “summer of action” by campaign groups designed to increase pressure on Theresa May and Jeremy Corbyn.

The organisers have said that at least 100,000 people attended the march.

There were boos from the crowd as the march approached Downing Street. After showing anger towards the PM, some began to chant “where’s Jeremy Corbyn?”

Among those addressing the demonstrators was Gina Miller, who successfully campaigned to ensure the UK could not trigger talks on leaving without the approval of Parliament.

She said: “Together we must stand up, demand our voices are heard, demand a people’s vote so that future generations can hear us say we did our bit we stood up and shouted for a country that’s together, kinder, tolerant.

“This is not a time to be silent.”

Liberal Democrat leader Sir Vince Cable said Brexit was “not a done deal” and could be reversed, while Green Party co-leader Caroline Lucas told the crowd that Brexit “will be a disaster for this country”.

One of the rally organisers, James McGrory from pressure group Open Britain, said there should be “a choice between leaving with the deal that the government negotiates, or staying in the European Union”.

Britain is due to leave on 29 March 2019, 46 years after it first joined the European Economic Community, the forerunner to the EU.

The government is giving Parliament a vote on the final deal, if one is reached, in the autumn – but it remains unclear what will happen if they reject it.

EU flags slowly filled Pall Mall all morning, and with chants of “people’s vote” echoing alongside drum beats and whistles, the protesters made their way towards Parliament.

This protest was a family affair – young children alongside veterans in wheelchairs, and all ages in between.

One 69-year-old woman, Dodo Pearce, said she travelled from Derbyshire to protest for the first time in her life.

And I received an eloquent lecture from an 11-year-old on the problems she thought Brexit would bring.

Despite the cheery demeanour of the marchers, the conversations were less hopeful.

One person said: “If a million people couldn’t march to stop Tony Blair going into Iraq, what chance have we got in getting a vote on the deal?”

Protester Colin Hopkins, 62, from Ipswich, said: “It’s really important to say we don’t dispute the decision, but the process and the destination.

“There isn’t any agreement on where we want to go with it, even in the government, and we have a right to a second opinion on that.”

Lesley Haas, a teacher from Bury St Edmunds, said: “What is their future? A lot of companies are leaving, so there is going to be an effect on jobs.

“I’m a German teacher and I’m worried the attitude of Brexit will make it harder to learn languages here. If it goes through, we may leave.”

Janet Watts, 61, from Suffolk, said she joined the march for her mother – who is from Denmark and arrived in Britain in 1953.

“She had her passport stamped when she got off the boat at Harwich, telling her she could stay,” she said. “That has been the same until this referendum happened.

“I think it is disgusting putting families at risk and putting her through this at the age of 83.”

But Shazia Hobbs, who attended the pro-Brexit UK Unity and Freedom march, said: “That march is silly. We voted to leave so we should leave.

“What do they want, best of three? We voted for Brexit.”

Demonstrators also chanted “we want our country back” and: “What do we want? Brexit. When do we want it? Now.”

Conservative MP Peter Bone – who supports Brexit – said if there were a second vote, the leave campaign would win again.

“The vast, vast majority of people, whether they are Leavers or Remainers, just want us to get on and come out this dreadful European Union super-state,” he said.

“There were 17.4 million people that voted for leave and if there are a few thousand in London complaining about it – that doesn’t seem to really make much difference.”