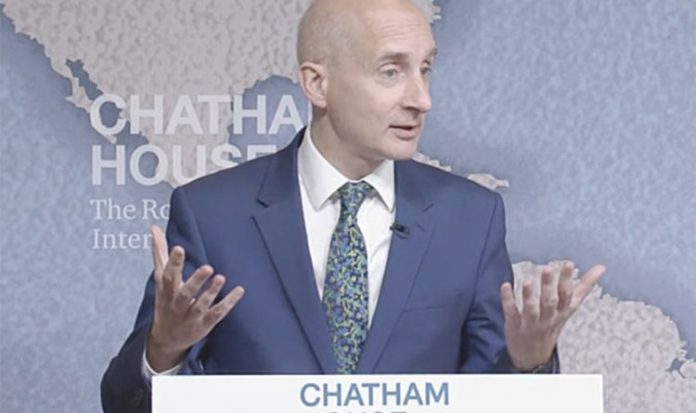 And in comments likely to rankle Brexiteers, he predicted a second vote would result in a healthy majority for remaining in the EU.

Lord Adonis, who has been campaigning against Britain’s exit from the EU ever since resigning from his post with the National Infrastructure Commission in December 2017, was speaking at a seminar hosted by the Royal Institute for International Affairs at Chatham House.

Describing his aim as being “to stop Brexit entirely”, Lord Adonis said: “Brexit is a cliff not a gradient.

“The fundamental problem is Brexit itself.

“Even if we could get something like a Norway or a Switzerland arrangement the difference between that and our present position is measured in miles not inches.

“We can and we must stop Brexit.”

To this end, Lord Adonis said a second vote was necessary to allow the British public to judge any draft withdrawal agreement proposed by Prime Minister Theresa May.

He said: “The only viable option is to put the draft treaty to the people and I would send it to all households in the country.

“Younger voters whose future depends on it would turn out to vote in record numbers to vote against Brexit.”

He also warned of the risks he said were associated with the prospect of a hard Brexit without such an agreement.

Lord Adonis said: “A no-deal scenario is not remotely viable.

“There is the risk of a blind Brexit, a Wil-E-Colyote Brexit, which sees us running off the cliff without a credible plan for our future.”

Lord Adonis also called on colleagues in the House of Commons to take a stand.

He said: “Brexit will only be stopped if MPs show courage and leadership.”

Lord Adonis insisted it was “not too late” for a second referendum, citing the EU’s willingness to delay the implementation of article 50 if the UK was to request one in order to hold another vote.

He added: “I believe we would win such a vote.

He suggested the UK would ultimately pay a “heavy price” before taking the “inevitable” decision to rejoin the bloc.

Lord Adonis served as a minister in different departments between 2005 and 2010, most notably as Secretary of State for Transport under then-Prime Minister Gordon Brown.

A prominent Europhile, he has frequently questioned the result of the 2016 referendum. A former Labour Party member, he resigned the whip in 2015 to sit as an independent

He told Nick Ferrari: “I thought the whole thing was silly.

“The idea of a duel, I might be old fashioned, but I don’t think duelling brings credit to anybody.”

Mr Rees-Mogg said he was happy to talk to Mr Adonis if he called the radio station – but Mr Ferrari said his team Ferrari “can’t seem to find him”.