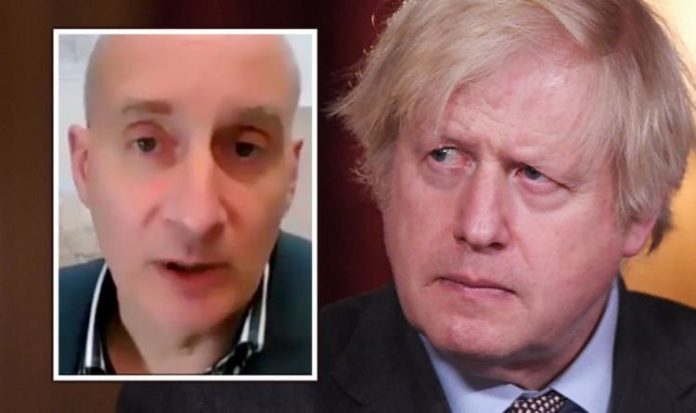 Lord Adonis attended a pro-EU meeting last night, after vowing to return the UK to the EU “where it belongs”. Britain finally cut ties with the European Union at the start of this year after turbulent negotiations with the Brussels bloc. Boris Johnson delivered on his pledge to “Get Brexit Done” and secured a trade pact with the European Union on Christmas Eve. But, just weeks after the UK started on its independent path away from the bloc, europhile and Labour peer Lord Adonis has called for closer ties with Brussels.

Unable to accept Britain’s historic decision to leave the European Union back in 2016, Lord Adonis has repeatedly demanded another referendum to try to reverse the democratic calls of 17.4 million Britons.

Now, Lord Adonis has claimed in the wake of Britain’s full departure from the EU and the coronavirus pandemic, which has seriously damaged economic across the globe, Britain will need closer ties with the EU.

He claimed the “European Union will still be the absolutely central” moving forward and called for the UK to seek a “radically closer” relationship with the bloc.

The Labour peer claimed doing so would be a “matter of economic survival”.

Speaking during a European Movement meeting, Lord Adonis said: “Its core trade and economic function are clearly as relevant now as they have ever been.

“The growth and post-Covid package which the EU has put in place is as ambitious as nothing that is being done anywhere in the world – including the $1.9trillion package that President Biden is seeking to steer through the US Congress as we speak.

“And, as we come out of Covid, it’s my view that the European Union will still be the absolutely central, continent-wide institution in terms of steering Europe’s economies and nations post-Brexit.

“And we will need to seek a closer and I hope radically closer, before too long, relationship with it.

“As a matter of economic survival as much as ideological preference.”

“Enormous challenges but we will get through them and ultimately get Britain back into the European Union where we belong!”

The European Movement campaign vows to “hold Boris Johnson to account” and adds, “now that we have left the EU, join the largest pro-European organisation in the UK and become a part of the European community for the future”.

But, any demands for the UK to rejoin the European Union could fall on deaf ears according to polling guru Sir John Curtice.

Writing for the WhatUKthinks website last week following recent opinion polls, he said: “A consistent body of evidence is emerging that some Remain supporters would not vote in favour of reversing Brexit even though they would still prefer Britain to be part of the EU.

“To that extent, there is an apparent acceptance on their part that Brexit is done and dusted.

“However, it is evidently only a minority of Remain voters – perhaps numbering no more than one in eight – who feel that way.

“Moreover, even when we take their views into account, voters as a whole still emerge as being almost equally divided between those who would like to be back inside the EU and those who would not.”

It comes as the UK has been one of the hardest-hit nations across the globe from the coronavirus pandemic with around four million cases and over 115,000 deaths from the virus.

But, Britain is a leading nation in vaccinating the population, and on Thursday Boris Johnson announced over 13.5 million people have now had a first dose of a Covid vaccine.

The European Union on the other hand is struggling with its vaccine rollout after suffering supply issues – which may slow some European nations in easing coronavirus restrictions and reopening their economies.

The UK Prime Minister is set to outline his roadmap out of lockdown later this month, amid calls to open schools by March 8.

It is unclear when Mr Johnson will be able to fully unlock the economy, but, Professor Neil Ferguson, dubbed ‘Professor Lockdown’ has said the rapid rollout of the UK’s vaccination programme could see lockdown measures largely lifted by May.

Whitehall insiders have indicated social distancing and masks may be required until the end of the year.