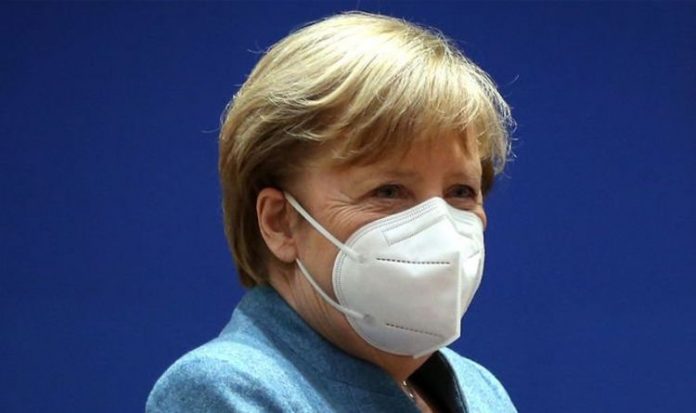 On Thursday Boris Johnson warned there is a “strong possibility” the UK will fail to agree a new trade deal with the EU. If followed an inconclusive meeting between the Prime Minister and European Commission President Ursula von der Leyen on Wednesday.

However, writing in the German Spigel magazine reporter Michael Sauga called on Ms Merkel to step in.

The journalist argued EU leaders had been mistaken in attempting to reverse the Brexit referendum result when it was clear this wouldn’t succeed and suggested the German chancellor holds some responsibility for the talks success.

He said: “British Prime Minister Johnson has once again driven talks with the EU to the brink of failure – at least that’s what the Germans believe.

“Why is nobody talking about the role of the Chancellor?

“Britain and the EU have an obligation to work together.

“They share the same values and the same understanding of the rule of law and democracy.

“It would be a first-order policy failure if both sides could not even come to an agreement on a rudimentary trade deal.”

Whilst the UK formally left the EU at the end of January it remains in a Brexit transition period until the end of the year.

Mr Sauga argued: “Not letting things get that far is not only a task for Boris Johnson and Ursula von der Leyen, but for all EU heads of Government.

“But especially for the German Chancellor, who stands for the largest economy on the continent and for the cohesion of the EU.

“It is high time she took over the Brexit talks.”

Currently around two-thirds of the fish caught in British territorial waters are taken by European boats.

The EU is demanding continued access to UK fishing waters after Brexit whilst the Government is resisting.

Should the UK fail to do this they want sanctions to immediately be applied.

However, Mr Johnson has argued this is an unacceptable infringement of British sovereignty and part of an effort to keep the UK “locked” within the European legal system.

Speaking on Thursday he said: “At the moment, I have to tell you in all candour, the treaty is not there yet and that was the strong view of our cabinet.”

If no new trade deal is reached Brussels is suggesting the UK and EU should have reciprocal access to each other’s fishing waters for another year as part of a package to ensure air and rail services still run.