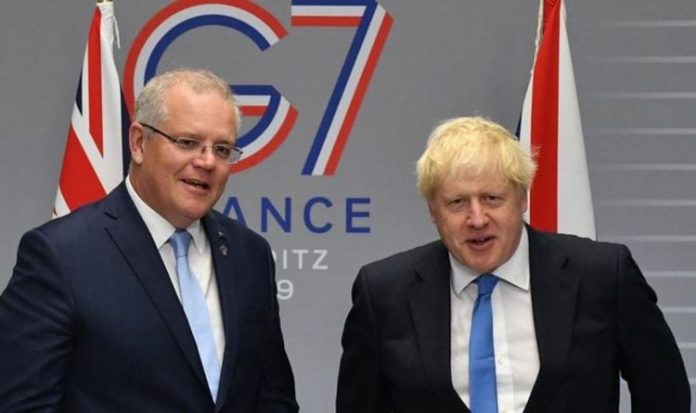 With the UK now free to agree its free trade agreements with states across the world, an Australian senator has called on the two to allow citizens to live and work in the two countries. Liberal Party Senator, James Paterson, called for Australia and the UK to strike a “generous” deal between the two long-term allies. In a report written by the senator, he insisted rules should be relaxed to allow free access to the two nations going forward.

He also indicated this prospect could be the initial steps of greater economic integration between New Zealand, Australia, the UK and Canada.

Writing a report for the Adam Smith Institute, he insisted Australia now stands ready to implement the system with the UK.

He said: “The British public’s decision to leave the EU and reclaim their sovereignty has provided the UK with the opportunity to reimagine its role in the world.

“It could become a global champion of free trade and the liberal values that underlie the rules-based international order.

“Australia stands ready to work with the UK to advance these values and to build on the already unique relationship both countries share.

“The Australia-UK free trade agreement should contain mutual recognition of standards and occupations.

“This would allow goods to be sold in our respective countries regardless of variations in standards and regulations, and individuals to practise an equivalent occupation without undertaking further testing or acquiring new qualifications.

“The deal should also include generous provisions to allow Australian and UK citizens to live and work in both countries.”

“As we build back from the impact of COVID-19 we have a wonderful opportunity to supercharge our economic relationship.

“It will mean more jobs, more growth, more prosperity in both our countries, and more opportunities for Australians and UK citizens to live and work in each other’s countries.”

A free trade agreement between Australia and the UK could increase exports to the former by up to £900million.

As of 2019 figures, the UK is Australia’s seventh-largest trading partner according to the Government figures.

International Trade Secretary, Liz Truss has also declared a trade deal with New Zealand is integral in helping the UK economy recover from the coronavirus pandemic.