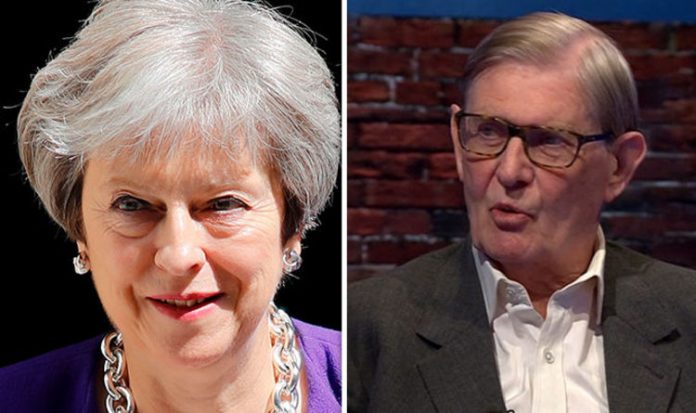 Appearing on the flagship show, Sir Bill Cash, Conservative MP and veteran Brexiteer, said there are some very important questions that have been raised by the statement the Government had put out.

He told BBC presenter Evan Davis: “First, does it meet the tests of the referendum itself?

“Dominic Grieve says it was a question of abstract questioning and abstract answers.

He continued by making a point: “The Repeal Act that went through two weeks ago specifically says that the 1972 Act will be repealed on Brexit day.

“That’s what becoming rather disturbing.”

When asked by Mr Davis if he then will vote, Mr Cash said: “I was deeply disappointed to say the least.

“As I said in the Commons this week ‘that is the law of the land’.”

The joint statement signed at Chequers by the Prime Minister and all her Cabinet ministers yesterday evening put forward a plan for an “economic and security partnership” with the European Union.

The plan, a close regulatory alignment with the bitter bloc’s single market for British exports, is a firm push towards a Brexit end-state that looks very much like Norway.

According to the proposal, the EU’s Court of Justice will also play a role in enforcing EU regulations in the UK through a “joint committee” set up to provide “binding independent arbitration”.

The move has been heavily condemned by many other Brexiteers, who see the Brexit blueprint as “Brexit only in name”.