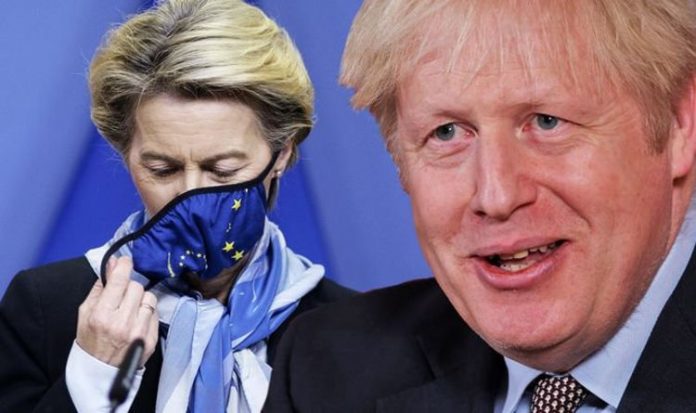 Mr Johnson warned he would not sign any deal which allowed the EU to put trade tariffs on British produce while also fishing the UK’s waters. A Government source said Mr Johnson was “ready to walk” – pulling the plug on 11 months of talks and setting the scene for a chaotic no deal exit. But Mr Johnson, the insider said, “stared them down” and the EU team, led by Ursula von der Leyen, finally relented.

Click on this LINK to read the Brexit deal in full.

It helped pave the way for a Brexit deal, secured at the last minute – in part due to Mr Johnson’s brinkmanship and nerve.

The source told the Sun: “The PM was ready to walk at that point.

“We were writing a script trying to explain to the world we had blown up a £660billion deal over less than a billion quid of fish.”

Late on Tuesday, the EU stepped back from their previous position of asking for a long transition period for their fishing rights in the UK’s waters.

He then showed the 1,260-page Brexit agreement.

The discussions over fishing rights were very tense right up to the last minute.

Mr Johnson wanted the EU to back down on its demands over fishing rights.

Ms Von der Leyen, president of the European Commission, said she would agree to a “six-year” transition period for EU boats to fish in British waters.

However, Mr Johnson hit back and said “five”.

He then heard nothing for almost three minutes.

The insider claimed the Downing Street switchboard then said: “I’m sorry Prime Minister, we seem to have lost the European Commission.”

This was when Mr Johnson said he knew Britain controlled “our destiny”.

Last night Government ministers were suspicious over the exact wording of the deal document.

Figures from the UK’s fishing industry have already claimed Mr Johnson is “sacrificing” them.

In his televised address to the nation, Mr Johnson said the deal brings “certainty to business, travellers and all the investors in our country”.

He added: “It is a happy, successful, and stable partnership with our friends in the EU for years to come.”