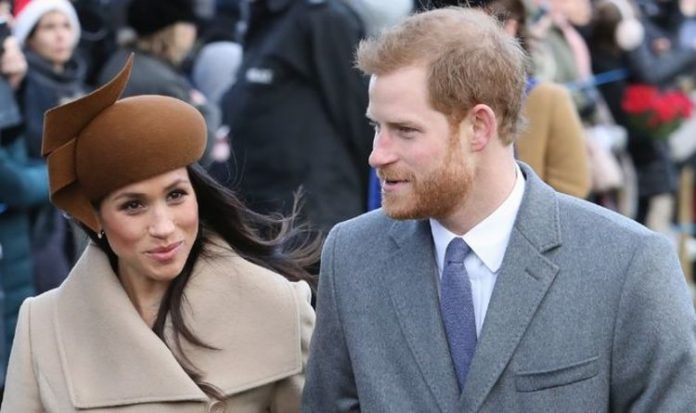 The Duke and Duchess of Sussex’s 2020 Christmas card was revealed earlier this week. Meghan, Harry and their young son Archie are shown in a stylised image sitting in front of a Wendy house with their pet dogs.

But this year’s image was different to their previous Christmas cards, which have been in black and white.

In 2019 they shared a black and white snap of Archie crawling up to the camera.

And the year before, Meghan and Harry picked a black and white picture from their wedding reception.

The Queen’s grandson and the ex-Suits star spent this Christmas at their new home in the US after quitting royal duties in March.

Their Christmas card photo features a Christmas tree with decorations chosen by Archie.

It was taken by Meghan’s mother Doria Ragland.

A spokesman for the Sussexes said about the card: “The original photo of the family was taken at their home earlier this month by the duchess’s mother.

“The small Christmas tree, including the homemade ornaments and other decorations, were selected by Archie, and the tree will be replanted after the holidays.”

READ MORE: Prince Harry ‘created problems for himself’ by trying to help Meghan

Caroline Yates, Mayhew’s chief executive officer, said: “We are delighted to have the Duchess of Sussex as our patron, and she has shone a huge light on our community-based animal welfare work over the last two years.

“We were especially honoured to recently receive a personal donation from the Duke and Duchess, which will enable us to help even more cats, dogs and pet owners in need over this tough winter period.”

Meghan and Harry announced bombshell plans to step back as senior royals in January.

The Queen held a crisis summit with Prince Charles, Prince William and Harry to discuss the Sussexes’ future roles.

Former actress Meghan and Harry are now living in an £11 million mansion in California.

As they launch new careers outside of the Royal Family, they have signed lucrative deals with Netflix and Spotify.