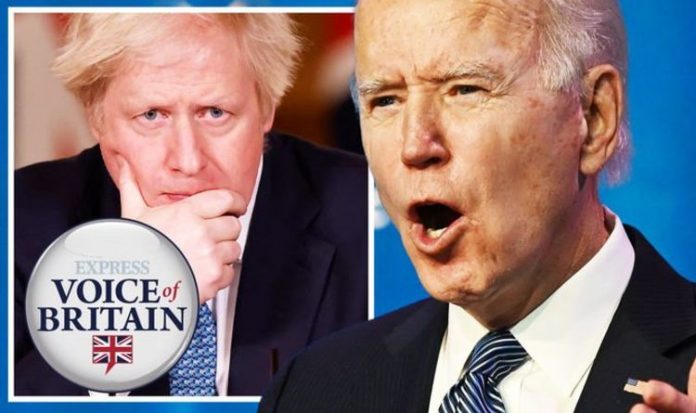 Boris Johnson will be keen to secure a trade agreement with the US this year and has declared his desire to work closely with Washington. With under two weeks left until Mr Biden takes office from Donald Trump, Express.co.uk asked in an exclusive online poll: “Should Brexit Britain pander to Joe Biden for US trade deal?” Voting on the poll, 15,436 out of 16,457 said the UK should not pander to the US.

Despite the value of trade with the US, readers stated Washington is not a friend of the UK.

One person said: “Why should we?

“We never had a trade agreement with them in the past.”

A second said: “No we don’t, he needs to fix his own country before he meddles with any other.

“America is more divided than our country for sure.”

A third said: “Blair demonstrated what being a US poodle looked like, so no thanks Biden.”

A fourth said: “The UK already trades with the USA and we do just fine, the UK doesn’t need an all-encompassing trade deal with the USA!

Under this, the two sides recognise the results of a conformity assessment, which is whereby a product meets specific legal requirements.

As of 2018 figures, the US accounted for 15 percent of the UK’s trade but as it stands, the relationship between the Prime Minister and Mr Biden remains unclear.

Some US officials have described Brexit as a mistake while under Barack Obama, the President-elect was opposed to the 2016 EU referendum.

Mr Biden has also likened the Prime Minister to Mr Trump and warned no trade deal would be signed if the Good Friday Agreement was damaged following the introduction of the UK Internal Market Bill.

Although the controversial elements of the bill were later removed, it is unclear what damage it has done with relations across the Atlantic.

Despite the delays, the UK Government has stated it remains confident over negotiations.

A spokesman said: “From the outset, we have engaged with US partners on a bipartisan basis — at the federal and state level.

“This agreement would support both of our economies to build back better from Covid-19.”