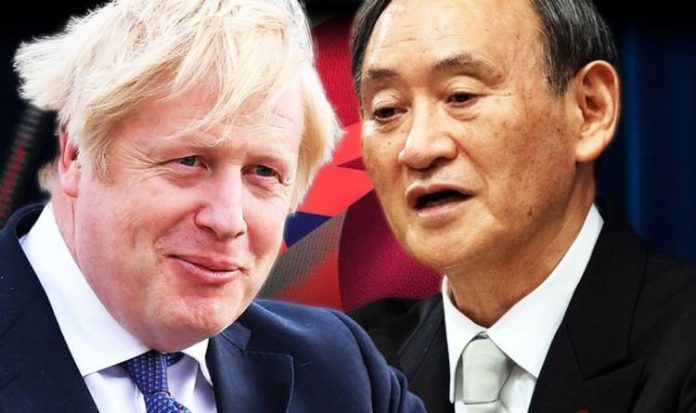 The Prime Minister congratulated Mr Suga and said he hoped his appointment would secure the “already rock solid relationship between our countries to new heights”. He tweeted: “Congratulations to @sugawitter on becoming Japan’s Prime Minister.

“I hope your appointment and the historic Free Trade Agreement we secured last week take the already rock solid relationship between our countries to new heights.”

His tweet comes after the UK reached its first major post-Brexit trade deal with Japan.

International Trade Secretary Liz Truss confirmed the deal, which could boost trade by an estimated £15 billion, hailing it as a “historic moment”.

The UK-Japan Comprehensive Economic Partnership Agreement was agreed in principle by Ms Truss and Japan’s foreign minister, Motegi Toshimitsu, in a video call on Friday morning.

Negotiations began in June – with most talks happening remotely due to the coronavirus pandemic.

A final text of the agreement is likely to be published in October, but the UK Government said that under its terms 99 percent of exports to Japan would benefit from tariff-free trade.

“It will help to create jobs and drive economic growth throughout the whole of the UK, with UK businesses set to benefit from tariff-free trade on 99 percent of exports to Japan.

“It is a historic moment and it shows what the UK can achieve outside of the European Union.”

He appointed a new cabinet that kept about half of the familiar faces from predecessor Shinzo Abe’s lineup.

Mr Suga, 71, Mr Abe’s longtime right-hand man, has pledged to pursue many of his predecessor’s programmes, including his “Abenomics” economic strategy, and to forge ahead with structural reforms, including deregulation and shutting down bureaucratic turf battles.

Mr Suga served under him in the pivotal post of chief cabinet secretary, acting as top government spokesman and coordinating policies.

Mr Suga, who won a ruling Liberal Democratic Party (LDP) leadership race by a landslide on Monday, faces a plethora of challenges, including tackling COVID-19 while reviving a battered economy and dealing with a rapidly ageing society.