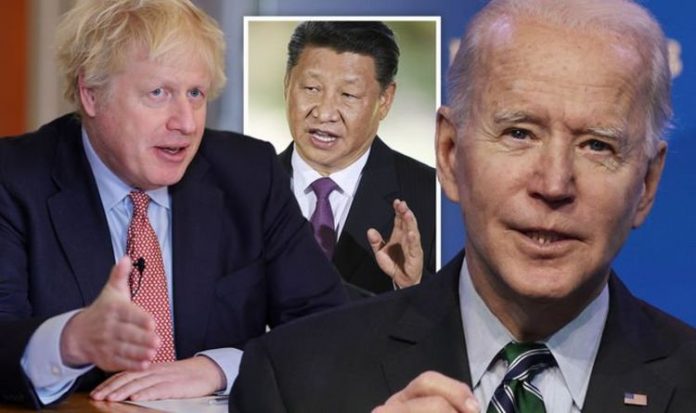 Prime Minister Boris Johnson is keen to create a secure relationship with the Biden administration, especially in the wake of Brexit and the incoming President’s past disparaging comments about the UK leaving the EU. The outgoing President, Donald Trump, started a trade war with China, and Mr Biden has acknowledged the tensions between two superpowers.

He said that the country will present a “special challenge” for him when he gets into the White House.

As the nation grows more assertive — with territorial claims through the South China Sea, bringing Hong Kong’s special status to an end and attempts to intimidate its neighbours — the West grows increasingly wary of China’s power.

Britain has been quick to demonstrate that it is on the same page in its approach towards China as the US in recent months.

He wants to “ensure no company that profits from forced labour in Xinjiang can do business in the UK, that no UK business is involved in their supply chains”.

Former Conservative leader and MP Iain Duncan Smith has been pushing for MPs to support an amendment to allow evidence of potential genocide in China to be brought to the High Country for judgement.

He also claimed on Twitter: ”Any attempt to have the treatment of the #Uyghur classified as genocide is blocked by China at the UN.”

Writing in The Spectator, commentator James Forsyth concluded: “The strengthening of Britain’s stance on China continues, and in ways that are hard to dismiss as tokenism.”

Indeed, this action against the treatment of Uyghur Muslims is the latest movement in a growing list of the Government’s moves to reduce China’s reach.

There was a U-turn over the intentions to have Huawei integrated into the UK’s 5G network, and ministers have recently emphasised that the Modern Slavery Act forbids Britain from buying any goods which may have been produced by forced labour.

Mr Forsyth claimed: “All this is designed to send a message to the incoming administration in Washington: the UK will put principles before profit even at the expense of the inevitable economic retaliation from Beijing.

They hope to move manufacturing out of China but are allegedly not pushing to move it west, according to Mr Forsyth.

The UK is hoping to join the Trans-Pacific Partnership, too, a 12-nation strong trade agreement.

But, some are sceptical of how the UK’s relationship will play out with the US.

Mr Biden is thought to be prioritising “trying to get our house in order at home” according to the US’ former director of National Intelligence, James Clapper.

Former US deputy ambassador to the UK Lewis Lukens, who served under both Barack Obama and Donald Trump’s administrations, told Politico: “I’d say the best case scenario for a [UK-US] deal is 2022.”

Yet, some in the UK believe that it’s not a trade deal with the US that Britain should be prioritising.

Tom Tugendhat, chair of the Parliament’s foreign affairs committee, said the focus should be on joining the Trans-Pacific Partnership to counter China’s growth.

He said: “We should be working with the US on global regulatory reform, carbon pricing and defending the rules-based system against China.”