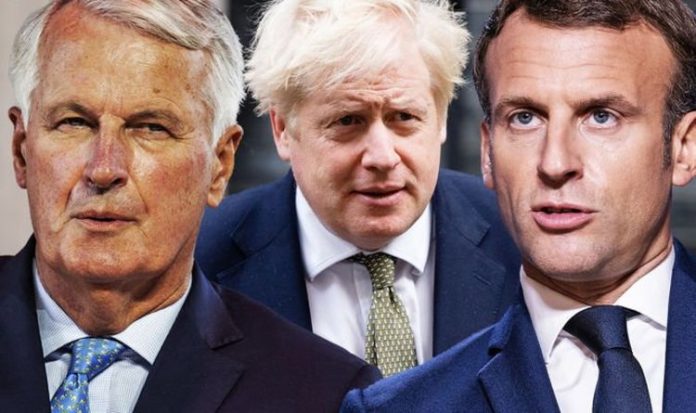 The Prime Minister has presented the future of the UK’s fisheries as one of the most important aspects of the current Brexit negotiations. With the industry set to benefit massively, Mr Johnson has been warned of the political consequences if he doesn’t deliver a good trade deal. Speaking to Express.co.uk, chief executive of the National Federation of Fishermen’s Organisation, Barrie Deas, warned there will be a huge fall out if fisheries are not protected.

However, Mr Deas also pointed the finger for the lack of a deal at France whom he claimed had been the “most intransigent”.

“Now if there’s a perception that it is not going to happen, that it’s an opportunity that’s been squandered.

“I think there would be a very heavy political cost associated with that.”

The UK is pushing for a deal whereby the two sides would negotiate access and quotas on a yearly basis.

This concept is not only how the EU operates within its agreement with Norway, but also how the landmark UK deal with Norway is outlined.

It is this balance, which Mr Deas states must be achieved between the UK and France in order to restore Britain’s fisheries.

He added: “It’s that balance that is missing in the relationship between the EU and the UK.

Talks resumed in Brussels this week before moving to videoconferences in pursuit of an agreement.

They will return to London this upcoming week after the failure to reach an agreement.

Now the October deadline has passed, it is thought the EU has set the middle of this month as the deadline for an agreement.

Crucially, Brussels needs the agreement to then be ratified by the EU 27 before the end of the year.

Throughout talks, Mr Barnier has insisted serious areas of divergence still remain on all three areas.