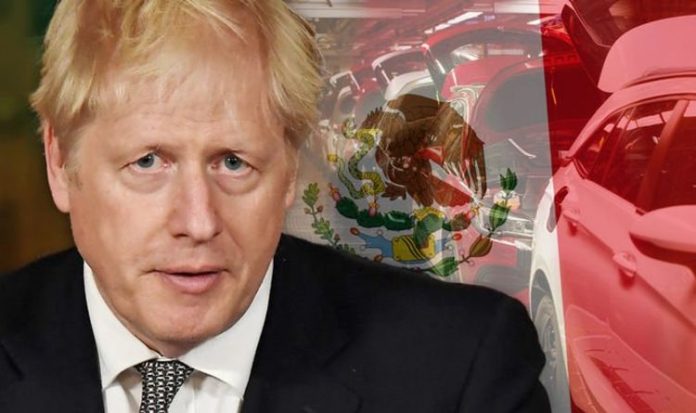 Brexit negotiators are under pressure to secure roll-over trade deals with certain states across the world before the end of the transition period on January 1. The UK has agreed to roll over the EU’s trade agreements with states such as South Korea, Iceland, Norway and Israel into next year. However, negotiations with Mexico have remained at an impasse, meaning as it stands, the UK will trade on WTO terms from January 1 2021.

If no deal is agreed between the two sides, British cars and trucks may face a 20 percent duty according to Politico.

Mike Hawes, chief executive of the Society of Motor Manufacturers and Traders, said: “Mexico is an important partner for UK Automotive, with which we currently enjoy reciprocal, tariff-free in cars, engines and parts, worth hundreds of millions of pounds every year as a result.”

According to the latest figures, the UK exported £160million worth of cars to Mexico coupled with £109million in engines last year.

A Mexico-UK trade deal is among 15 trade agreements which have not been rolled over into 2021.

As shown by the Government’s own trade agreements, the UK has not signed deals with Turkey, Singapore, or Canada.

Trade with Canada is valued at £19.8billion as of 2018, which amounts to 1.5 percent of all UK trade, according to the latest figures.

Preliminary talks have begun with Canada, with the two states also negotiating the UK’s eventual ascension into the Comprehensive and Progressive Agreement for Trans-Pacific Partnership (CPTPP).

Ahead of any deal, Canada’s Prime Minister, Justin Trudeau has warned any delay will be down to the UK side.

Commenting on the deals, senior fellow at the Centre of European Reform said: “It now seems likely that the UK will manage to roll over the majority of the EU’s trade agreements by the end of the year.

“Of those outstanding, Canada, Singapore and Vietnam will probably be done in the coming weeks, but Mexico will be a struggle.

“Perhaps the most important one of those left to do is also among the trickiest: Turkey.

“Turkey is in a customs union with the EU, which means that it can only strike a trade deal with the UK if the EU also does so.

“Assuming the EU and UK do reach agreement, this still doesn’t leave a lot of time to get everything sorted with Turkey.”

Lord David Frost and Michel Barnier met in Brussels this week in order to try and break the current deadlock.