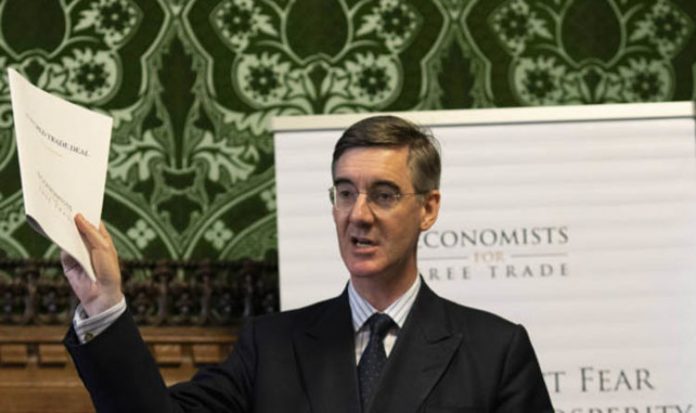 The advert will point out that a World Trade Deal – which means the UK does not compromise with the EU and uses World Trade Organisation (WTO) rules instead – is better than the Prime Minister’s Chequers proposal.

Economists for Free Trade have estimated that a World Trade deal with no EU deal could boost Britain by £1 trillion.

The selected newspapers cover the length and breadth of the whole nation – from London’s Evening Standard to Newcastle’s Chronicle, from the South Wales Echo and Evening Post to the Cambridge News, and from the Plymouth Herald to Scotland’s Daily Record.

It compares the Prime Minister’s favoured deal with the “new deals” and “new opportunities” a World Trade Deal would bring.

It warns that Chequers will shackle the UK to EU laws, ensure the continuation of mass migration and commit the UK to handing over £39 billion to Brussels.

By comparison, a World Trade Deal would give the UK the freedom to trade around the world, create a “fair and managed” migration system, and reduce the cost of living for British people.

Commenting on the ads, Richard Tice, Vice-Chairman of Leave Means Leave, said: “We have relaunched the Leave campaign and we will stop at nothing to ensure the Prime Minister chucks Chequers and delivers Brexit in its entirety.

“Leave Means Leave will be engaging with as many people across the country to ensure Project Fear is torn apart so that the economic benefits of Brexit are revealed.”

The advertising campaign is to be launched as Leave Means Leave has organised a series of “Chuck Chequers” rallies across the UK.

The rallies kick off next Saturday (22 September) in Bolton, where former Brexit Secretary David Davis, Nigel Farage MEP and Kate Hoey MP (Labour) will take the campaigns message to thousands of people in the University of Bolton Stadium, for the nearly sold out event.

The tour will then continue on to Torquay, Bournemouth, Gateshead and Harrogate.