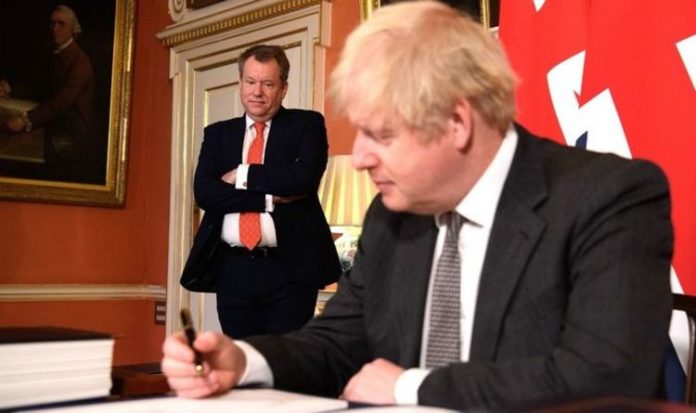 And Hull-based UK Fisheries Ltd fears it could be put out of business completely unless a solution is found in the next few weeks – ultimately costing the industry up to £100million. Mr Johnson unveiled his post-Brexit trade deal on Christmas Eve, with advocates pointing out the agreement guarantees tariff-free trade for goods, and takes the UK out of the jurisdiction of the European Court of Justice (ECJ).

The EU deal is done, but for English distant-waters fishing the future is anything but certain

However, critics have accused the Prime Minister of caving in when it comes to fishing rights – and UK Fisheries has suggested the problems did not end with access to UK waters either, with distant-waters fishing – referring to boats reliant on catches outside the nation’s territorial waters – at risk.

In a blog posted on the company’s website, by Sir Barney White-Spunner, chairman of the advisory board of UK Fisheries explained: “The EU deal is done, but for English distant-waters fishing the future is anything but certain.

“Our state-of-the-art freezer trawler Kirkella is tied up in Hull. Right now, we’re not supporting jobs upstream or downstream.

“We’re not generating wealth in the form of inward investment and UK taxes. We’re not bringing home British cod and haddock for our national dish.”

Sir Barney, a former Commander of the Field Army who was previously Executive Chairman of the Countryside Alliance, asked: “Will the Government do the deals needed to keep our crews at work in 2021? Does it intend to?

“As of now we don’t know when, or even if, we will be able to put to fish off Norway, our main fishing ground for decades.”

There was little evidence the UK Government had listened to concerns which the company had been voicing for more than two years, the article explained.

He added: “Without individual bilateral deals on quotas with Greenland, the Faroes and especially Norway, there is no long-term viable distant-waters fishing industry in the UK from January 1.

“We may be able to scrape by for a few wboireeks fishing off Svalbard, but that alone can’t keep the industry afloat.

“And as far as we can tell we’re the only business in the UK fishing industry whose very existence has been put in jeopardy by such avoidable government inaction.”

Boris Johnson has been urged to forge ahead with bilateral deals (Image: GETTY)

Distant-waters fisherman are reliant on waters close to Norway, the Faroes and Greenland (Image: GETTY)

The longer the situation persisted, the more difficult it would be to rectify, the blog warned.

Sir Barney said: “If it continues, and we desperately hope that it doesn’t, our crews will have to find work in other industries – if they can.

“Our European owners, who have invested £120m over the past decade in rescuing distant waters fishing, will no longer want to sit by and watch their assets depreciate.

“The additional £60–100m they planned to invest in our industry will find a grateful home elsewhere.

“So much for all the grand post-Brexit promises of ‘prodigious amounts of fish’ and ‘seas of opportunity’.”

All that was required was for the Government to strike deals with Norway, Greenland and the Faroes which would enable their boats to continue fishing on existing terms, or to make better bilateral deals.

Sir Barney continued: “Imagine a £50m factory on shore that wasn’t able to work just because the government had failed to hold a negotiation that, compared with the EU deal, will be the simplest imaginable; one that we have been asking it to have for years.

“It’s time to regain some of the distant fishing opportunities we lost in the 1980s, and the UK government just has to get on with it so we can do our jobs.

The future of the UK fishing industry has been a key Brexit issue (Image: GETTY)

“The alternative – and one that gets closer for every day that goes by – is a dismal end to English distant waters fishing, an industry that has helped nourish our nation for centuries.

“Yes, that would be the outcome of all those plans to ‘take back control’.

“What truly sovereign government would sit back and allow this to happen to its own fishers?”

Express.co.uk has contacted Defra to ask them about the concerns outlined by Sir Barney.