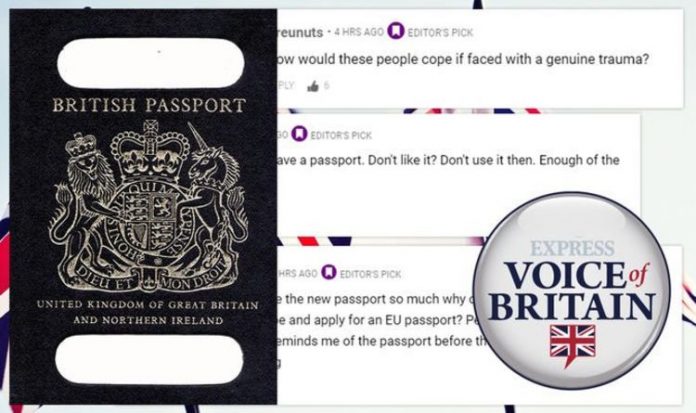 After receiving her new blue passport, former Liberal Democrat mayoral candidate Siobhan Benita declared she would hate the document until it expires. In response to her over-the-top complaint, Express.co.uk readers mocked the europhile and demanded Rejoiners stop “whining”. One person said: “Nobody is forced to have a passport.

“Don’t like it? Don’t use it then. Enough of the whining.”

Another said: “If Rejoiners hate the new passport so much why don’t they all relocate to mainland Europe and apply for an EU passport?

“Personally I love the new passport as it reminds me of the passport before the EU changed both the colour and the wording.”

Blue passports were first introduced in 1921 but were phased out after members of the European Economic Community agreed to unify the colour.

The Government began the rollout of the new passport last year ahead of the end of the transition period.

Commenting on the rollout of the new passport, Home Secretary Priti Patel claimed leaving the EU would give the UK an ideal opportunity to restore our national identity.

She said: “Leaving the European Union gave us a unique opportunity to restore our national identity and forge a new path in the world.

“By returning to the iconic blue and gold design, the British passport will once again be entwined with our national identity and I cannot wait to travel on one.”

Since the turn of the year, however, there have been reports of UK nationals who live abroad having their passports stamped.

Doing so is a breach of the withdrawal agreement because, under the deal, Brits living in the EU by the end of 2020 should be able to enter and leave the Schengen Zone.

According to Politico, several UK nationals who live abroad have experienced issues while attempting to enter the Schengen Zone.

Fiona Godfrey, co-chair of the campaign group British in Europe, stated this had become a widespread issues since January 1.

Although UK nationals have the required paperwork, they have claimed many are experiencing issues at the border.