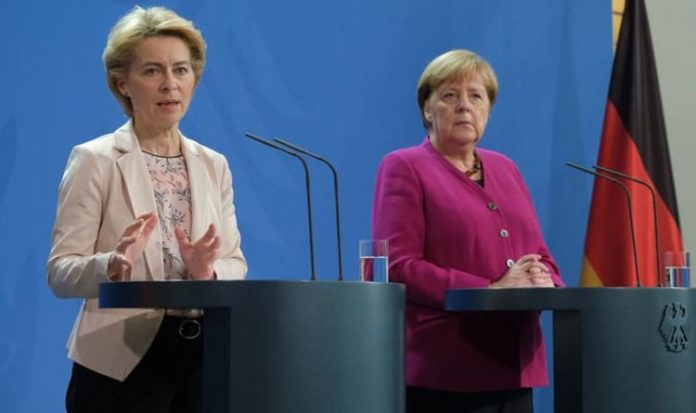 The bloc’s regulator could reject giving Britain’s AstraZeneca jab to the Over-65s after two German newspapers reported the vaccine is only eight percent effective in pensioners, citing sources from Berlin.

Furthermore, EU health chiefs have claimed the AstraZeneca jab fails to adequately protect pensioners after a discovery was made last night.

Details of the findings remain unclear, and drug firm AstraZeneca has furiously denied the reports.

An AstraZeneca spokesperson said: “Reports that the AstraZeneca/Oxford vaccine efficacy is as low as 8 per cent in adults over 65 are absolutely incorrect.

“In the UK the Joint Committee on Vaccination and Immunisation (JVCI) supported use in the population and the Medicines and Healthcare products Regulatory Agency (MHRA) included this group without dose adjustment in the authorisation for emergency supply.

“In November we published details in The Lancet demonstrating that older showed immune responses to the vaccine, with 100 per cent of older adults generating spike-specific antibodies after the second dose.”

AstraZeneca recently angered Brussels by warning it would cut the number of vaccines it will deliver to Europe by the end of March from 80million to 31million yesterday.

This poses a major threat to the EU’s vaccine supplies as well as throwing into question the effectiveness of immunisation strategies in other countries including the UK.

READ  A Sustainable Recovery for People and Planet

Currently in the UK, getting AstraZeneca’s jabs in as many pensioners as possible is key to ending lockdown.

Britain has so far ordered 40million doses of the jab.

The UK is expecting to receive nearly 3.5million Pfizer doses within the next three weeks.