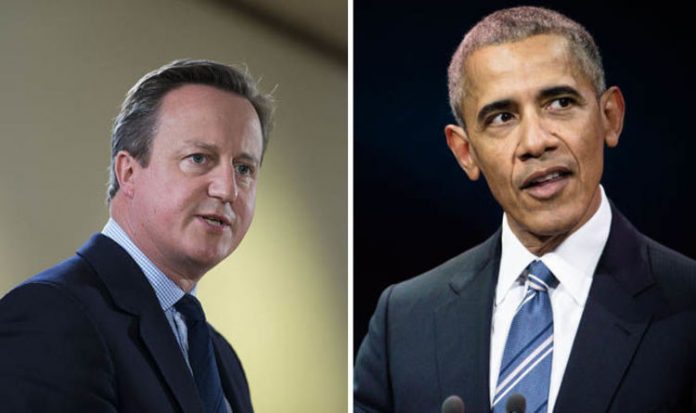 Mr Obama’s former speech writer Ben Rhodes has revealed that Mr Cameron asked the then US President to say Britain would be “at the back of the queue” if it voted Leave to help his flagging referendum campaign.

The revelation has been seized on by Brexiteers who say it confirms that the Project Fear campaign, which also included a series of false claims that the economy would collapse, was manufactured and bore no truth in reality.

Speaking to BBC Radio 4’s Today programme, Mr Rhodes said: “We had come here to try to help the Remain campaign and we had a meeting with David Cameron and his team and we were all kind of in violent agreement about the negative consequences of Brexit.

“And in talking about the press conference they were going to hold together – Cameron and Obama – we were discussing the arguments for the Brexit campaign.

“And some of the arguments were based on the notion that the United States could just negotiate its own free trade agreement with the UK quickly and we were all agreeing that that was unlikely to happen.

“And as Obama was saying that, somebody on the British side said: ‘We’d end up being at the back of the queue,’ and everybody laughed and Obama said ‘That is exactly right’.

“Then he was asked: ‘It would be good if you could repeat that point in the press conference’, and of course he did.”

Asked whether it was the then prime minister himself who made the request, Mr Rhodes said: “Yes. To be fair to Cameron, I don’t know that Cameron was suggesting the exact phrase that had been used on his side, but that is what was put forward. Obama said: ‘Yes, I’m here to be helpful.’

“Substantively, it was correct. It wasn’t true you could just skip to the front of the line, but ‘queue’ is not a word Obama uses in casual conversation.”

Senior Tory MP Peter Bone, who founded the Brexit campaign group Grassroots Out, said: “This has just confirmed what we alway knew.

“Like all of the Project Fear campaign it was completely manufactured to try to scare the British people.

“The great thing was though that it was completely counterproductive for Remain and most people’s reaction to Obama was ‘how dare he!’”

Mr Bone also suggested that recent interventions against a “no deal” by Airbus, which is owned by the German and French governments, and BMW can “be seen in the same light”.

He said: “Nobody believes they are going to leave the UK and it is all part of the atempts to scare Britain.”