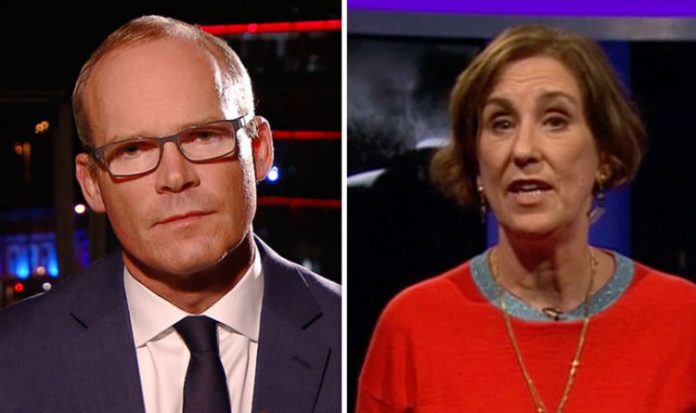 His words come after a devastating day for Theresa May when the EU rejected her Chequers plan, calling it “unworkable”.

Mr Coveney said on Newsnight: “There’s going to be no vote on Chequers anywhere between now and then.

“Chequers is the British Government’s settled approach towards what they want to see in the future relationship. The EU may have different views.”

Mrs May has faced pressure from members of her Cabinet and her party’s backbench, not to give any more away to the EU.

However, the Brussels bloc has insisted the UK’s position must be altered.

President of the European Council Donald Tusk said: “Everybody shared the view that whilst there are positive elements in the Chequers proposal, the suggested framework for economic cooperation will not work, not least because it risks undermining the single market.”

French President Emmanuel Macron echoed these words, stating that the Chequers plan does not “respect the integrity of the single market.”

Mr Coveney said Chequers will now be a “basis for negotiation” and that the text of the withdrawal treaty still needs to be finalised.

He said: “The withdrawal treaty between the EU and the UK is 90 percent agreed – it’s the last 10 percent which is difficult and which is political.”

Finding a solution to the Irish border problem is one of the remaining sticking points in negotiations.

Mr Coveney said a hard border between Northern Ireland and the Republic “would have a corrosive effect on relationships between communities in the north and south”.

He added: “Many people in the United Kingdom who understand the fragility of the peace process in Ireland, which is 20 years old this year, understand why it’s so important.”

Transport Secretary Chris Grayling told Newsnight: “At the moment what the EU is asking around Northern Ireland is simply impossible for any UK Government to accept.

“If they stick with that position there will be no deal.”

Mrs May herself reiterated she was “preparing for no deal” after a frustrating day fighting for her proposals that lost her two Cabinet ministers.

All parties continue to say that despite their disagreements, they hope a deal can be reached between the EU and the UK.