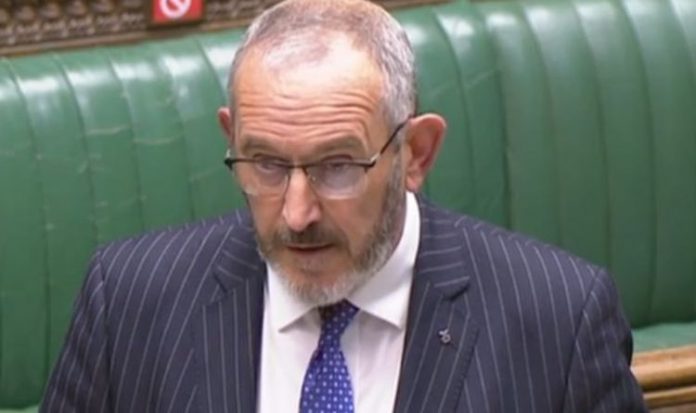 The SNP MP argued farmers and doctors in Scotland have expressed concerns food standards in the UK could be under threat due to future trade deal with non-EU countries once the UK is fully freed of Brussels shackles next year. But Mr Hosie was met by a confident Liz Truss who reassured him and the House, food standards in the UK would be safe under any new post-Brexit trade deal with the rest of the world.

As the SNP MP remained adamant in his belief, he said: “All that answer confirms is that there are no legislative protections in the trade bill.”

The comment sparked the hilarious reaction of MPs in the Commons who were prompt to burst into laughter ridiculing the SNP MP.

But he continued: “MPs will have no say in any future trade deal except for potentially a take it or leave it choice after the negotiations are concluded.

“Given Which? tell us that 95 percent of the public wants to maintain food standards, why is this Government continuing to rule out real legislative protections in a trade bill which will occur with the views of our farmers, our doctors and the general public?”

READ MORE: Boris given key to ensuring Sturgeon’s indy dream does not happen

Ms Truss replied: “These standards, such as the ban on chlorinated chicken and hormone-injected beef, are already in UK law as part of the EU Withdrawal Act.

“And I’ve been explicit, it’s not a matter for trade policy. It is a matter for our domestic law what standards we have in this country.

“And we’re not trading it away, so it should not be part of any trade bill.”

International Trade minister Greg Hands described the recent round of trade talks between the UK and EU as “positive”.

READ  Section 28 for vulnerable victims and witnesses in Crown Courts

Responding to Labour MP Sir Mark Hendrick (Preston), who criticised the Prime Minister’s claim of having an “oven-ready deal”, Mr Hands told the Commons: “I think he started off with a bit of a misnomer.

“If I were to report from the most recent round of negotiations with the EU, actually, our negotiator reported these talks – which were part of the intensified process – they had good talks around the Court of Justice, the EU’s concern about the complex Switzerland-style set of agreements and so on.

“So actually that was quite a positive round.”