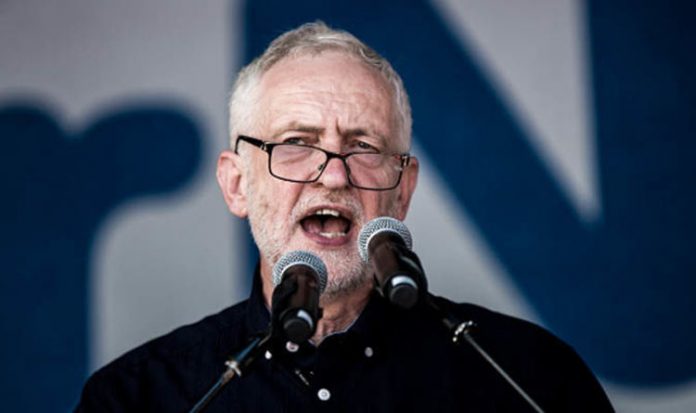 Delegates at the Unite conference backed a so-called “people’s vote” on the outcome of talks with the EU which has been pushed by Remainers to reverse the historic leave vote in 2016.

It came after union baron Len McCluskey, the general secretary of Unite, described Brexit as “a nightmare” in his keynote speech and urged delegates to back another vote on it.

Earlier this week, the Daily Express revealed that the union’s Brexit co-ordinator Simon Dubbins had been pushing for another vote on leaving the EU behind the scenes.

And a leaked recording of Mr Corbyn’s right hand man John McDonnell, the shadow Chancellor, also revealed that he was moving towards supporting the proposal.

He told a meeting of hard left activists that the leadership “doesn’t want to rule out any form of democratic engagement”.

At the union’s policy conference in Brighton, Mr McCluskey went on a rant about Brexit claiming it was a right wing plot.

He said: “Theresa May is held prisoner by the dogmatists and fantasists of the far right.

“These people see in Brexit the chance to turn Britain into the low-wage, deregulated, race-to-the-bottom society of their dreams.

“But Brexit is turning into a nightmare for the rest of us – a nightmare of uncertainty above all.

“The shadow of job losses is hanging over much of the British economy, including the jobs of tens of thousands of Unite members.”

Mr McCluskey said it was urgent that the Labour Party and trade union movement come together around an alternative to the Conservatives’ plans.

He said: “Labour has started to do that with Jeremy Corbyn’s call for Britain to stay in a customs union with the EU.

“And to have access to, not membership of, a tariff-free single market, as well as his opposition to any hard border dividing Ireland once more.

“Labour has the chance to speak for the whole country in resisting the catastrophic hard Brexit the Tories have in store.”

Mr McCluskey tried to claim Unite was not calling for a second referendum but, like the Labour Party, remained open to the possibility of a vote on any deal the Tories come back with.

He added: “Our movement needs to speak with a single voice in opposition to the Tory cliff-edge Brexit in support of jobs, workers’ rights and equality for all, removing the concerns that many of our members have, and in also offering hope to those who backed Brexit out of despair.”

Over the weekend Mr Corbyn side-stepped questions over whether he backs a second referendum.

But the Conservatives said the Unite vote is the latest evidence that Labour does not respect the EU referendum result.

Tory MP David Morris said: “It’s clear that Labour and their union paymasters don’t respect the result of the referendum.

“There is now no doubt that Labour’s outriders are working with Labour to frustrate the Brexit process rather than make it a success.”