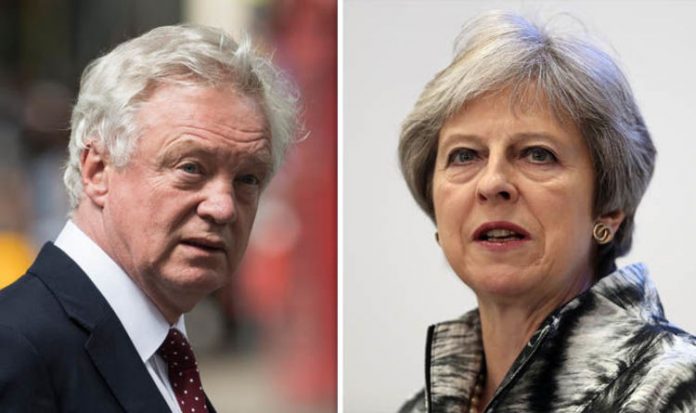 In his first remarks on the Commons backbenches since quitting the Cabinet last week, the senior Tory urged his colleagues to support the legislation following the changes.

Mr Davis insisted he was not making a “resignation statement” but taking part in the normal parliamentary scrutiny of legislation.

He told the Commons: “The Taxation (Cross-Border Trade) Bill and its partner, the Trade Bill coming tomorrow, are vital pieces of legislation.

“In the newspapers at the weekend I read that some people were so cross with the white paper that they were proposing to vote against this.

“Well, I don’t think they can be much more cross than me with the white paper, but I do urge them not to vote against them.”

Mr Davis went on to say that there was a presumption that there is a “magical frictionless” trade system in place at the moment, but told MPs that Operation Stack had been used 74 times in 20 years, and in 2015 it “took up 31 days of friction”.

“Nobody wants it, nobody likes that, but they cope with it,” he said.

Mr Davis also told MPs that what the UK would have to give up to join a customs arrangement with the EU “is much more than is imagined”.

He said: “The European Union is a slow and not very effective negotiator of free trade agreements, we keep hearing about their negotiating power, their size.

“Actually the fact that they represent 28 different countries means they come up with sub-optimal outcomes all the time and actually we’re the country that does least well out of the EU free trade agreements.”

He went on to tell MPs that the UK had distinct advantages “over and above our economic weight”, he said: “We have the English language, we have English law, we’re leaders in life sciences, artificial intelligence, Internet, medicine, a whole series of areas.”

Mr Davis later raised the Detroit car industry as an example of how future trade arrangements with the EU could be organised, claiming “all can be dealt with by electronic pre-notification”.

Mr Davis added: “There may be 300 border crossings, but there are only six ports. So rest of world imports can actually be surveilled and controlled very straightforwardly.

“So the issue which has got much more difficult since becoming politicised, it was actually working quite well in negotiations before it became politicised is eminently soluble, soluble by technical means, soluble by co-operation between the two states.”