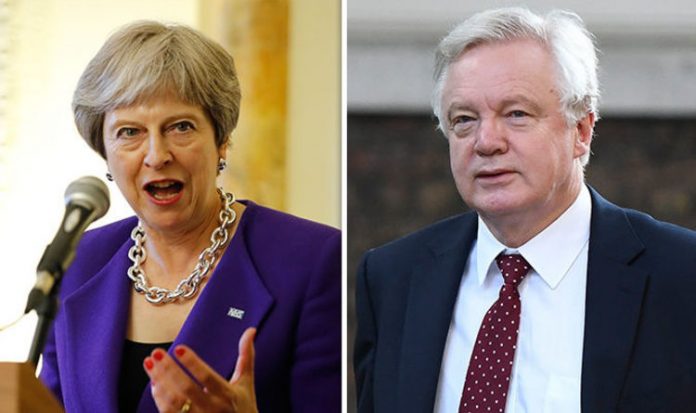 Mrs May is under pressure ahead of tomorrow’s crunch Cabinet summit at her Chequers retreat after Mr Davis set out his opposition to her “third way” proposal on post-Brexit customs.

In a bid to avert a furious Cabinet clash, the Brexit secretary said Mrs May’s plans for a third option for the UK’s customs deal with the EU is unworkable and will be point-blank rejected by Brussels.

Downing Street officials have drawn up the third model ahead of a crunch Cabinet away-day at Mrs May’s Chequers retreat on Friday.

No details about the proposal have been revealed, but reports suggest the Prime Minister favours a ‘customs partnership’ with Brussels, which would see Britain collecting EU import tariffs.

The document is set to propose the UK stays indefinitely in a single market for goods after Brexit.

Theresa May is in Berlin today for a crunch meeting with Angela Merkel to test the waters for her third customs option – which builds on the ‘maximum facilitation’ plan which would rely on technology to remove the need for border checks.

It is also apparently different to the original, rejected proposal of a customs partnership which would see the UK collect tariffs on behalf of the EU.

Mr Davis reminded the Tory leader Brussels chiefs had already rejected the idea of allowing Britain to become third party country, where it polices its own borders.

A source told the Daily Telegraph: “This plan would be like Donald Trump allowing us to keep an eye on his borders for him, it will never happen.

“We need to have this row in the party now so that we have time to negotiate something bespoke with heads of state before it’s too late.

And influential backbencher Jacob Rees-Mogg has also warned Mrs May could be forced out of office if she fails to deliver Brexit.

Meanwhile, senior Brussels officials have reportedly said they would not accept the UK’s demands after reading a draft of the Government’s Brexit white paper.

In a fresh attack on Mrs May’s negotiation stance, a EU source accused the UK of wanting to “have its cake and eat it”.

The insider said: “We read the white paper and we read ‘cake’.”