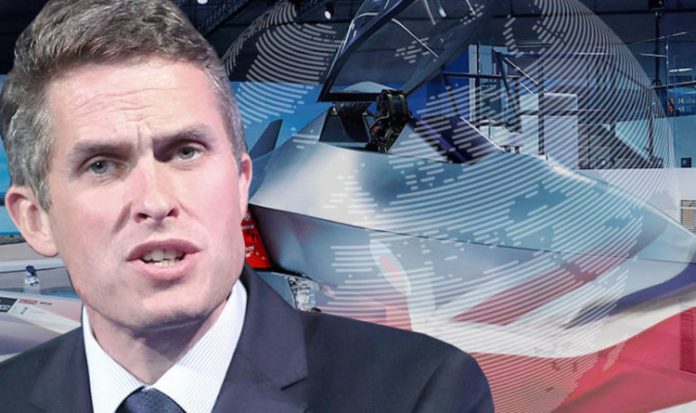 Speaking during his Combat Air Strategy statement in the House of Commons, Mr Williamson told MPs he was confident a number of nations would want to work with the UK because of our apparent strong combat air capabilities.

He claimed this will happen as Britain currently has a “world leading position in combat air”.

On Monday, the Defence Secretary unveiled the brand new fighter jet, Tempest, at the Farnborough International Airshow, adding the new jet “shows our allies that we are open to working together to protect the skies”, operating from 2034.

Mr Williamson said: “In terms of partnership with other nations, I don’t think that we should actually just look to Europe in terms of future partnerships.

“For far too often we have been bound and thought that we could only look to other European Union nations.

“The time is now to look to the whole globe, see what other nations we can partner with and make sure that we build strong and new alliances.

“These are many nations that we have strong military links with and strong and deep connections with.

“We’re very confident because of our world leading position in combat air there are many nations that will want to work with us.

But Shadow Defence Secretary Nia Griffith warned the Combat Air Strategy was being published at a time when there is a great amount of uncertainty surrounding the aerospace industry regarding the impact of Brexit.

Airbus, which employs 33,000 people in the UK, has been particularly vocal about its post-Brexit fears, and last month threatened to quit the UK in the event of a no deal Brexit as it would “lead to severe disruption and interruption of UK production”.

Ms Griffith had asked if Mr Williamson agreed with the assessment of the aviation industry, trade body ADS and other MPs that the UK must be in a customs union in order to guarantee the industry’s future success.

She added: “A key aspect of the Combat Air Strategy is the creation of a project to consider how next generation capability can be delivered.

“I’m not quite sure how this Government adopted the name Team Tempest but it does seem quite apt for this week really.”

Prime Minister Theresa May has come under heavy fire recently over cuts to military spending, rejecting a campaign from Mr Williamson to increase it, insisting Britain had the biggest defence budget in Europe and second largest among NATO members.

But US Defence Secretary Jim Mattis lashed out at this stance, warning that France could replace the UK as Washington’s closest military ally unless more money is pumped into Britain’s defence budget.

In a leaked document to Mr Williamson, he warned the UK might not continue as a “global actor” unless military funding was increased.