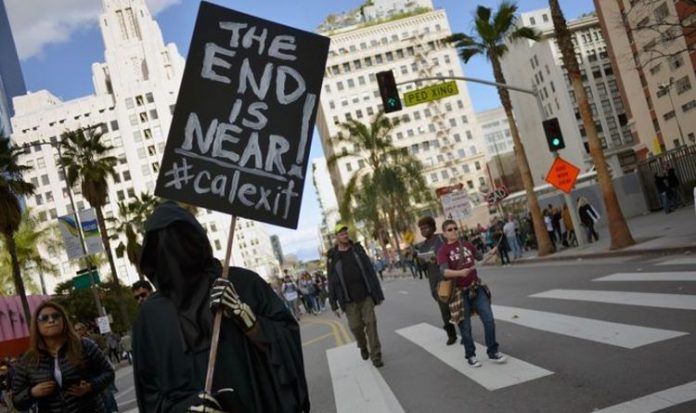 Marcus Evans of Yes California says the movement to pull the western US state away from the federal government is gathering support from officials. Next month, state lawmakers have agreed to launch a formal petition which could pave the way for a state-wide vote on Californian independence.

Mr Evans hopes the campaign will be a success, and he told Express.co.uk about the parallels between so-called ‘Calexit’ and Brexit.

He said: “I gotta say, when Brexit passed, there was a lot of talk about ‘oh it won’t work, they’ll come to their senses’, and ‘Britain will be destroyed.’

“It’s years later, and none of that happened. Britain’s still doing it, there’s still a Britain, the pound has not collapsed.

“That is incredibly inspiring to everyone here in California.”

The president of the Yes California movement – which is pushing for ‘Calexit’ alongside grassroots activist group Independent California – explained there are similarities between policy frustrations in California now and what was being discussed in the UK prior to Brexit.

This includes control over immigration and laws involving, for example, animal welfare and science.

Mr Evans said California “had to go around” the Federal government on stem cell research and was also batted aside when it tried to implement laws improving animal welfare standards for caged hens.

Another key similarity is on the subject of money. Mr Evans said: “California’s a donor state. We lose about $70 billion to $100 billion – some years it’s only $30 billion – to the federal government support states.

“In 2016 we lost $30 billion subsidising America. The California government’s legislative analysis office surmised that we could house all of the homeless in San Francisco for about $25 billion. So the amount of money we lost in one year, we could have wiped out homelessness in the entire bay area.

“So it’s an incredible, the amount of money we lose. Additionally, we’re held back economically.”

It is perhaps similar to one of the central arguments of the UK’s Leave campaign touted by Nigel Farage, when he argued Britain sent £350 million per week to the EU that could instead be spent on the NHS or other services – though he later retracted this.

However, there are some clear differences, too. Mr Evans notes California would like a more relaxed approach to immigration than the US federal government allows.

He said: “We lose billions of dollars because California’s internationally connected and America isn’t. Because the middle of America is racist, and does not like immigrants or the foreign world, and California literally depends on them.

Some Calexit sentiments, including on the subject of financial obligations, have parallels with the UK Leave campaign and claims made by Nigel Farage (Image: Hollie Adams / Getty)

“Brexit was about: ‘Do we want Europeans telling us who we can have trade deals with, and deciding who gets to immigrate into our country and deciding all these policies for us?’

“California’s asking the same question; we just have a somewhat different opinion on immigration, but we have a hugely similar opinion on trade.

“We’re worried this big cluster doesn’t ‘get’ us and is going to hold us back, and we think, frankly, we’d do better on our own.”

The current movement has roots dating back to 2014, when Barack Obama was the US President.

Mr Evans said “Californians love Obama,” but added there were still sentiments of frustration towards the way the Federal government treated the state.

These sentiments became even more pronounced when Republican Donald Trump became president in 2016. Mr Evans explained such issues surrounding his presidency including the deportation of undocumented migrants led to concern in the state.

More recent issues including the federal government’s handling of the COVID-19 pandemic and the racial unrest following the killing of George Floyd this year brought the situation to a head.

“We noticed a giant uptick in Calexit support when governor Gavin Newsom announced the pact where he was going to ignore federal protocols on COVID-19, so things got real big.

“And they just go: ‘you know what? I don’t know what’s going on. I love America, but this is about life and death. We are going to secede, or we are not going to have a functional government.”

If the statewide petition in September gets around 600,000 signatures in five months, then California will go to the polls to decide whether or not it wants independence.

An anti-Trump protest in California after his election in 2016. (Image: Aurelien Meunier / Getty)

However, if just 25 percent of this goal is met, the state government will have to hold a public hearing on the matter. Mr Evans hopes this would bring in media attention which will bring the matter of Californian independence to the world stage.

And if it happens, other states may follow. Mr Evans said: “The Calexit movement has already had dialogue with the leaders of Alaska Independence, Hawaii sovereignty, Cascadia (Oregon and Washington) secession, and have recently talked with secessionists in Portland.

“From what we have been told, they all watch closely what happens in California and each one of them has said that if California goes it will likely set the stage for other west coast states to leave – if they want to.”