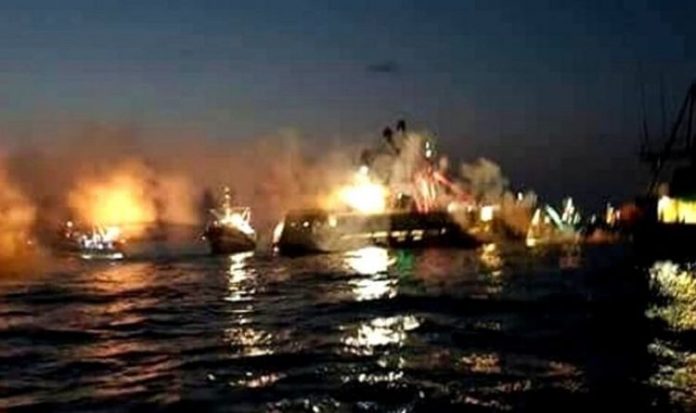 Barrie Deas, CEO of the National Federation of Fishermen’s Organisations (NFFO), also voiced confidence that there would be no capitulation on the issue of fishing rights, irrespective of the claims of EU chief negotiator Michel Barnier today. Mr Deas was speaking after the Government confirmed four Royal Navy vessels will be deployed from January 1 to challenge French ships fishing in UK waters in the event that the UK and EU fail to strike a free trade agreement.

The news has been welcomed by Brexiteers, although Tobias Ellwood, chairman of Parliament’s defence committee, has voiced his concern, suggesting the already-overstretched navy could ill-afford to get involved.

Mr Deas told Express.co.uk: “At one level it is necessary for the UK to make plain that access to fish in UK waters after the end of the transition will not be automatic and that the UK authority will have a responsibility to police its waters.

“The focus on the hardware tends to overshadow the fact that the EU has its own legislation for dealing with illegal fishing by an EU vessel in third country waters – Illegal, Unreported and Unregulated Fishing (IUU) fishing.

“This can mean being excused for eligibility lists in the future.

“Likewise, if there is a deal which grants EU vessels access, all EU vessels will require a UK licence.

“Any vessel that has fished illegally in UK waters for commercial reasons or to make a political gesture could be excluded from the list of eligible vessels.”

Mr Deas said: “Iceland and the ‘scallop wars’ are examples of where there was conflict at sea over fishing rights.

“But under examination, the issues do not provide an exact comparison – in the case of scallops it was French fishermen attacking British vessels which had a legal right to fish there.

“In the case of Iceland, the case is more relevant in that it was an independent country trying to assert its rights over another country which claimed historic rights. Iceland won that one.”

With barely a fortnight to go before the end of the transition period, the prospects of a deal are still hanging in the balance, with fishing – along with state aid and the role of the ECJ – the three key sticking points.

Mr Barnier subsequently told EU colleagues there had been “some limited progress”, over the weekend which EU diplomat suggested amounted to “backtracking” by the UK, Express.co.uk’s Brussels correspondent Joe Barnes reported today.

However, the suggestion was rapidly rejected as “just not true” by a UK source.

Mr Deas, asked about the situation in the context of whether he believed a deal was in the offing, said: “Like everyone else, we are just waiting.

“But there is no sign that the UK will back down of fishing rights – zero.”