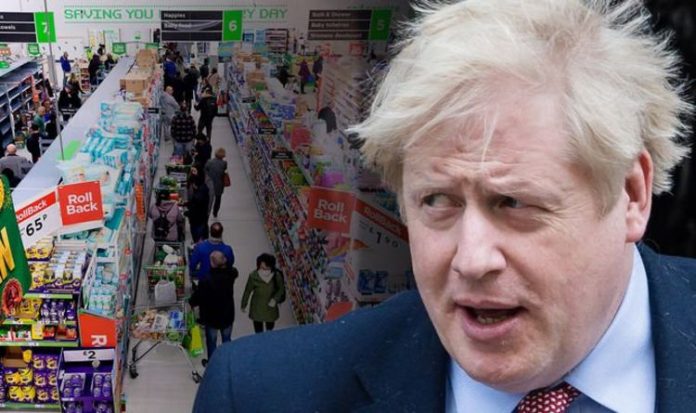 And David Jones, deputy chairman of the European Research Group (ERG) says the only solution may be more legislation to “disapply” EU law in addition to the controversial Internal Market Bill published by Boris Johnson earlier this month. The problem was highlighted by Martin Howe QC, chairman of Lawyers for Britain, last week, who pointed out the Withdrawal Agreement agreed last year means after the end of the year, labels which British food and drink businesses use will no longer be legally recognised on the continent – or, crucially, in Northern Ireland.

Given the time needed to print new labels, it seems increasingly likely that retailers will face huge problems once January 1 arrives, if an agreement between the UK and EU is not reached by then.

He said: “Frankly it is part of the residual problem we will have when we have left the transition period because of the way that the Northern Ireland protocol operates.

“So every time you look at it, it is more and more as if effectively Northern Ireland will be economically annexed by the European Union.”

Boris Johnson has another Northern Ireland-related headache which is not addressed by the Bill (Image: GETTY)

Mr Jones added: “The Internal Market Bill has got clauses in Part 5 that are aimed at mitigating the impact by allowing courts to disapply EU law domestically.

“But it is a bit like the hydra in Greek mythology – every time you chop off one head another half a dozen appear.

“And this is part of the problem of the Northern Ireland protocol which will mean that it will probably be extremely difficult for supermarket chains to stock in Northern Ireland using products that are commonly available in the rest of the UK.

“So ultimately you will see Northern Ireland supermarkets stocked with goods supplied by the EU.”

Together with Mr Howe, Mr Jones, also a lawyer by profession, was one of eight legal experts who ran the rule over the backstop plan for Northern Ireland contained in Theresa May’s draft Withdrawal Agreement last year.

He said: “It is very worrying because it is going to change the face of Northern Ireland and it is going to be detrimental to the Union in the long run.

“As Martin rightly says labelling is not the sexiest of issues to have to consider, it is part of a problem that is going to have to be addressed by the Government.

“It is an important problem and it would at the very least deprive shoppers in Northern Ireland of the goods that they are used to and that they routinely buy and prefer.

“I haven’t spoken to retailers about this but I’d imagine the big supermarket chains are going to be extremely worried about this.”

Mr Jones said it was quite well known that because of the provisions of the Withdrawal Agreement combined with the protocol, there were likely to be checks on British goods coming into Northern Ireland.

He added: “That is going to be addressed by the Internal Market Bill.

“However this particular issue is not going to addressed by the Internal Market Bill so we probably will need further legislation.”

Stressing the urgency in a message aimed at supermarkets, Mr Jones said: “They haven’t got time just to ‘look into it’ – it’s coming down the tracks in three months time.

“The only obvious solution seems to me is legislation which would disapply these requirements in domestic UK law but that, of course, is picking another fight with the EU.

“But on the other hand, we’ve picked so many fights with the EU maybe another one doesn’t really matter very much.”

Speaking last week, Mr Howe told Express.co.uk: “The problem is, and it may sound a totally trivial thing, under the law, if you’ve got a packet of frozen chips, for example, you are not allowed to sell them in the EU and therefore you would not be able to sell them in Northern Ireland.

“So if you are a supermarket which has a supply chain across the whole of the UK, what do you do?

“One fears that as from January 1 you would have to have completely separate supply chains just for labelling reasons.

“What about the time needed to make the changes and reprint the labels and so on?

“By itself, this could lead to food shortages in Northern Ireland.”

Tesco has said it is considering possible solutions (Image: GETTY)

A spokeswoman told Express.co.uk: “We are aware of product labelling changes and we are working with our suppliers to prepare for these.”

Express.co.uk has also approached Sainsbury’s, which has 31 stores, and Asda, which has 17, for comments.

Speaking last week, a Cabinet Office spokeswoman told Express.co.uk: “The Government is committed to working with stakeholders to ensure there are workable arrangements for Northern Ireland businesses, and to providing clear operational guidance so that businesses can prepare for the end of the transition period and beyond.

“That work is ongoing and further details will be set out in due course.”