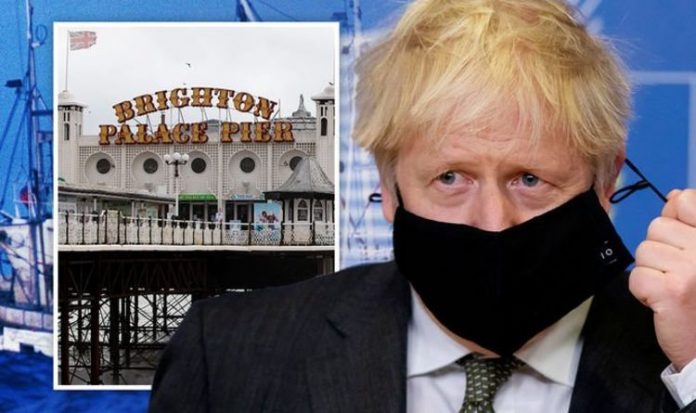 With just two weeks to go until the end of the transition period, Prime Minister Boris Johnson and European Commission President Ursula von der Leyen are locked in crunch talks over the future of the EU-UK trading relationship. While Mr Johnson has ceded ground on the key issue of regulatory divergence, neither side is relenting on the issue of fisheries. The UK Government is determined that Britain should take back control of its waters and enter into an annual negotiation with the EU over access, as is the case with Norway.

However, several EU countries are set to lose out considerably from such an arrangement and French President Emmanual Macron has even threatened to veto a trade deal unless they get their way.

Outside the EU, the UK should be entitled to its own Exclusive Economic Zone (EEZ), which stretches for up to 200 miles away from its shores or up to the median point between it and its neighbour (eg. halfway across the English Channel).

However, even before the Common Fisheries Policy, boats from European countries used to flout the UK’s fishing limits.

For example, the UK had general fishing limits of 12 miles, but France and Belgium were entitled to fish in the six to 12-mile zone.

Documents found at the National Archives by Express.co.uk have revealed that Belgian trawlers were accused of brazenly breaking these limits and fishing even closer to Britain’s shoreline.

Indeed, it was claimed there were persistent breaches of the six-mile limit by trawlers off the Sussex coast in the early Seventies.

Andrew Bowden, Tory MP for Brighton Kemptown at the time, asked Foreign Office Under-Secretary of State, Anthony Royle, in Parliament whether he would protest to the Belgian government about the issue on February 14, 1972.

British fishermen are hoping Boris Johnson will continue to stand up for their interests (Image: GETTY)

Mr Royle responded that there was “no evidence” of persistent breaches.

Mr Bowden hit back: “Is my Honourable Friend aware that the offshore fishermen of Brighton and Sussex will regard that an unsatisfactory response?

“On January 26, a number of Belgian trawlers were seen by the two night watchmen on the Palace Pier in Brighton actually fishing in the area between the two piers.

“In the light of this and other instances where Belgian trawlers have been fishing within the six-mile limit, will my Honourable Friend reconsider his reply?”

Mr Royle insisted that only seven skippers of Belgian vessels had been charged with offences within British fishing limits ‒ one for breaching the six-mile limit and the others for conservation offences.

He added that Royal Navy fisheries protection vessels carrying out patrols in the area had not witnessed the alleged offences.

Liberal MP Russell Johnston then pointed out to the minister that this was evidence that illegal activities were not being caught, not that they were not occurring.

He said: “Surely the Minister will accept that the problem is that of catching people?

Mr Royle responded that he would be willing to examine any evidence of this illegal fishing that could be provided.

Mr Bowden then produced letters sent to him by constituents claiming that they had spotted Belgian vessels within the limit.

The first was a letter from Brighton resident PJ Wickens, who said: “On January 24 of this year while trawling myself, I saw two Belgium beam trawlers inside our six-mile limit.

“One, the ‘Alfredo’, was fishing 5 ¾ miles of Shoreham, the other, which I think was the ‘Kontiki’, or a boat very similar, was fishing 5 ½ miles off Lancing ‒ these positions I made from my own Decca.”

A second letter, from Southwick resident D Watts, read: “I was fishing on Sunday, January 23 in a position six miles south of Shoreham.

“Two Belgian trawlers were continually trawling around this area, for quite a bit of time well within the six-mile limit.”

A few days ago, sources close to Mr Johnson threatened to deploy Royal Navy ships to patrol UK waters in the event of a no deal.

While he has been criticised by Tory MPs like Tobias Ellwood for this, this history of confirmed and alleged breaches by foreign trawlers show that patrolling may be necessary.