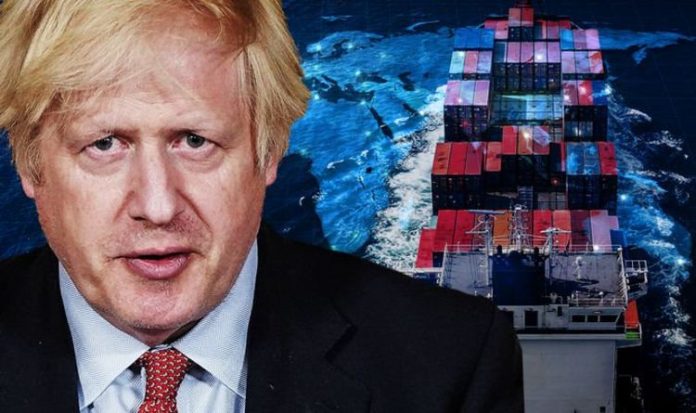 This means just 0.7 percent of British businesses benefit from sending their goods to EU member states. Brexit Facts4EU.Org spokesman David Evans urged Prime Minister Boris Johnson to “walk away” and “repudiate the Withdrawal Treaty based on the EU’s lack of good faith in all its negotiations with the UK to date”.

His rallying cry comes after the research group unveiled a report which revealed “only a tiny proportion of the UK’s businesses do any goods trade with the EU at all”.

After analysing official HMRC and Government data, figures showed more than five million UK businesses neither import from, nor export to, the bloc.

Mr Evans told Express.co.uk: “For almost five years the Remain Establishment have tried to frame the Brexit debate around global numbers which have little relevance to Express readers in their own lives.

“Our Facts4EU.Org report shows that in reality only a tiny proportion of the UK’s businesses do any goods trade with the EU at all.

“Yes, it’s true that the UK businesses selling goods to the EU tend to be larger, and therefore tend to employ more people per business and to export in higher volumes.

Mr Evans said he hoped the figures would push people in the UK to buy British-produced goods.

He added: “There is now a groundswell of opinion that British people will be preferring to buy British goods going forward.

“In our opinion this has been driven by what ordinary people see as an unjust and bullying attitude by the EU during the withdrawal and trade negotiations. Frankly, we can’t disagree with them.

“Our confirmed view based on over five years of research, seven days-a-week, is that we should walk away, and that the UK Government should repudiate the Withdrawal Treaty based on the EU’s lack of good faith in all its negotiations with the UK to date.”

The UK and EU’s negotiators’ teams are in fraught talks to reach a deal on their future relationship ahead of a meeting of the leaders of the 27-nation bloc next week.

Further talks are scheduled in Brussels ahead of that summit.

The UK formally left the EU on January 31, more than three years after it voted for Brexit in a referendum.