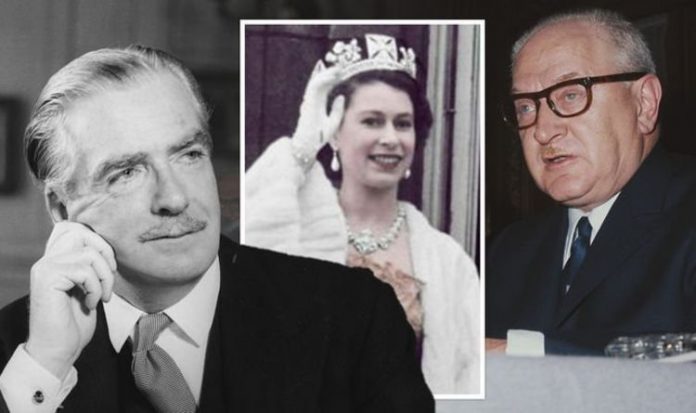 The EU imposed a ban on shellfish imports from the UK this month, telling British fishermen they are barred indefinitely from selling live mussels, oysters, clams and cockles to the bloc. Jersey is also at the centre of a fishing dispute – the Channel Island granted French boats temporary licences to fish in its waters after pressure from both Paris and Brussels. The Brexit trade deal talks also provoked concern as French President Emmanuel Macron threatened to block an agreement being reached. Relations between the UK and France haven’t always been this fraught however, as one French leader suggested his country could unite with Britain forming “Frangleterre”.

The remarkable claim was made by former French Prime Minister Guy Mollet, 60 years before the UK voted to leave the EU.

In 2007, documents emerged showing that, in 1956, Britain and France discussed the possibility of uniting and Queen Elizabeth II becoming France’s head of state.

Mr Mollet visited London to discuss the proposal with his counterpart Anthony Eden, who turned down the idea.

However, the British Prime Minister gave positive consideration to Mr Mollet’s next suggestion – that France should be allowed to join the Commonwealth.

A Government document dated September 28, 1956, shows Mr Eden recommended “immediate consideration” of France’s Commonwealth bid and Mr Mollet “had not thought there need be difficulty over France accepting the headship of Her Majesty [Queen Elizabeth II]; [and] that the French would welcome a common citizenship arrangement on the Irish basis”.

Mr Mollet’s bid came as France was in turmoil – suffering economic difficulties and a war with Algeria.

The French leader was seeking to line up his international allies, turning to Britain, a staunch French ally during two world wars.

Upon discovering evidence of France’s bid to unite with Britain, experts said they were shocked.

He added: “French and British history shows that a merger of the countries would today be politically and diplomatically out of the question.”

Jean-Pierre Maulny, deputy head of Paris’s Institute for International and Strategic Relations, claimed that if France and the UK could settle their political differences, a proposal of Mr Mollet’s type “could even come to the surface again”.

The former Europe minister Denis MacShane added: “France and England are like an old married couple who often think of killing each other, but would never dream of divorcing.”

Wartime leader Winston Churchill also sought a Franco-British union in 1940, described by the London School of Economics as “the forgotten attempt to form a European Union”.