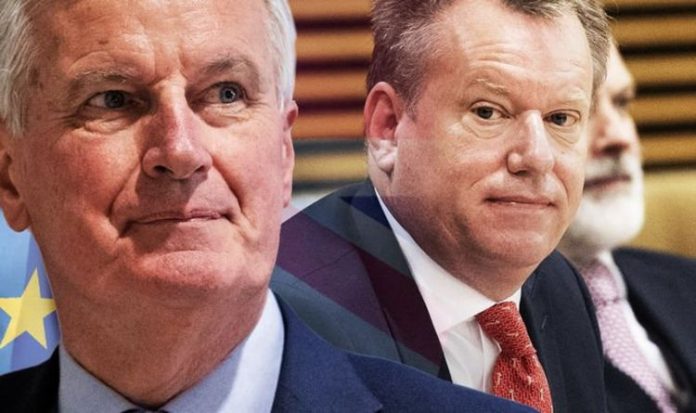 The UK and EU are in the midst of an 11-month Brexit transition period, with Britain remaining bound to the EU’s single market and customs union rules until the deadline on December 31, 2020. Negotiations between the two sides on trade and the future relationship began in March, but little progress, with the negotiating teams led by David Frost and Michel Barnier blaming each other for refusing to relent on several key red lines. Both sides remain hopeful of agreeing a deal in time for it to be ratified by the European Parliament in October and complete in time before the end of the transition period.

Last month Mr Frost warned Conservative Party MPs Britain will win just 60 percent of its objectives in any trade deal with the EU.

He is reported to have privately made the assurance to Tory ministers after another week of failed negotiations.

But Wyn Grant, British political scientist and Professor of Politics at the University of Warwick, warned the pressure is now on the UK as the clock ticks down to the possibility of a no deal outcome.

He told Express.co.uk: “The EU holds most of the cards so 60 percent of objectives being met in any trade deal with the EU may be a realistic assessment, although a little pessimistic.

“The EU is unlikely to be that fazed by a UK withdrawal from the talks as they would expect the UK to return once the consequences of a no deal became evident after January 1.

“It is difficult for the UK to take a harder line when it is going to look like a bluff.

“The EU market matters more to the UK than the other way round.

“Both sides would actually prefer to strike an agreement, but there is a real risk that they won’t.”

READ MORE: EU ‘to collapse in 10 years’ as three countries tipped to leave

He told this website: “The truth of the matter is, despite huge fanfare, Boris’ proposed deal barely differed at all from May’s.

“He managed to successfully spin that it would lead to a much better outcome for Brexiteers, but now the crunch is coming it seems apparent it won’t.

“The only option to achieve the Brexit people voted for remains a no deal settlement, but ideally a managed one.”

Mr Harris-Quinney also warned: “Sixty percent of Boris’s deal is considerably worse than May’s deal. It should be dismissed out of hand.

“There is no reason not to continue to push for a deal that satisfies the objectives of Brexit, but all indications at this time suggest it won’t be possible and only a no deal outcome will do so.

“If we concede and agree to the EU’s demands and a deal that is even weaker than the one Boris proposed it shows a catastrophic weakness of leadership.

“He will see the support for this government plummet even below the levels seen under May’s Premiership.”