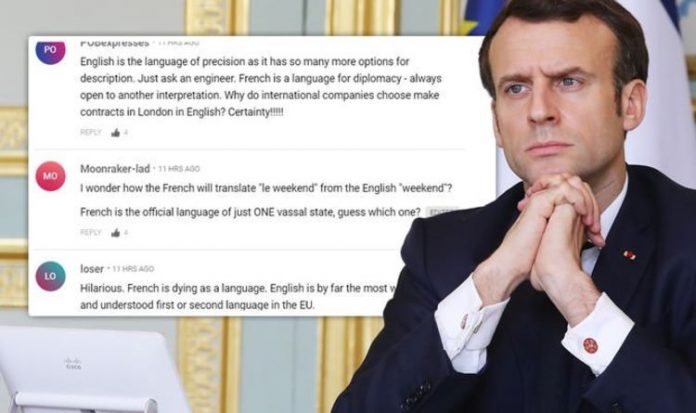 Right-wing author and commentator Éric Zemmour told CNEWS he thought English had “crushed” French and argued it was now time to recall French as the official language of the European Union. He said: “English has completely crushed other languages, especially French. Indeed if the British had not left, if Brexit hadn’t happened, we would not be having this discussion.”

Mr Zemmour continued: “English was accepted by everyone, including the French.

“Now that the UK is gone, there are now only two English speaking countries: Malta and Ireland.

“Not that many compared to the entire EU population.

“I think this is the time to launch a counter-offensive in favour of French, to recall that French was the original language of EU

institutions, that English shouldn’t have replaced it and that there is no reason to speak English now that the English are gone.”

But his remarks, reported by Express.co.uk, were met with outrage by furious readers.

One said: “Of course the French would say that but French is a dying language.

“It is not used, it is not taught so much and Spanish is more important now along with Chinese, Arabic and English.”

Another reader said: “English is the international language of business.

“One of the reasons why the EU has been unsuccessful at luring banks and businesses to Europe is because their staff don’t want to learn French.”

Another said: “French is of no relevance for most of the world.

“English is the modern language with over one million words, French has about 130,000 words.”

Mr Zemmour’s intervention was not the first time a Frenchman has called for French to become the EU’s official language.

France’s minister for European Affairs Clement Beaune said “it will be difficult for people to understand why we would prefer to use broken English after Brexit”, after the UK finally signed a trade deal with the bloc.

In 2018, a senior French official left the room because the European council decided to draw up the multi-year draft budget in English.

But EU chiefs seem to have clear ideas on the issue.

The bloc’s official website states: “Even after the withdrawal of the United Kingdom from the EU, English remains the official language of Ireland and Malta.”