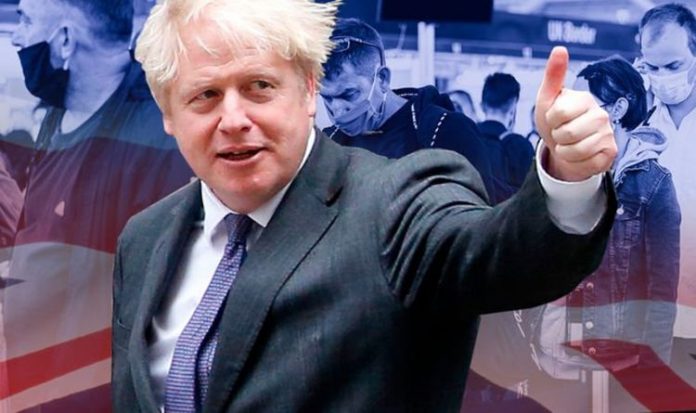 And one expert has said the data was an eloquent illustration of the nation’s appeal as a workplace with Brexit looming. The analysis, undertaken by global job site Indeed, compared the search behaviour of overseas job seekers looking online for work in the UK.

During the last year, the share of clicks on UK vacancies by candidates based outside the EU increased by 19.7 percent.

During the same period, the share of clicks from EU workers increased by just 1.3 percent.

In total, the share of clicks on Indeed UK from the rest of the world is now almost two percent, higher than the EU figure – roughly 1.5 percent.

The news is a boost for Boris Johnson’s Global Britain vision (Image: GETTY)

Clicks on Indeed’s site from outside the EU are outstripping those from within (Image: Indeed)

While we don’t yet know the terms under which Britain will trade with the European Union, one thing that appears much clearer is Britain’s appeal to international jobseekers

Jack Kennedy, economist at the global job site Indeed, said: “While we don’t yet know the terms under which Britain will trade with the European Union, one thing that appears much clearer is Britain’s appeal to international jobseekers.

“For years, European interest in UK jobs used to exceed that from the rest of the world but as that dipped after the 2016 referendum our research shows that clicks on jobs by people in non-EU countries started to climb before soaring nearly 20 percent in the last year.

“Now – for the first time in seven years – the average UK role is attracting more interest from outside the EU than from Europe.”

Mr Kennedy added: “This reversal of trends means employers are increasingly able to tap into global pools of skilled talent to fill higher-paying roles such as those in technology and engineering, which we know attract a higher degree of interest from abroad.”

The gap in interest in UK jobs between EU workers and non-EU jobseekers has been closing ever since the 2016 Brexit referendum.

With the end of the Brexit transition period now just weeks away, for the first time, EU citizens coming to the UK to work are facing visa restrictions.

Another graphic indicates a spike in searches from people in Hong Kong (Image: Indeed)

Skilled jobs including those in IT attract a lot of interest from outside the EU (Image: Indeed)

The spike in interest from non-EU workers is partly driven by jobseekers from Hong Kong, undoubtedly the result of the UK Government’s decision in summer to offer a path to citizenship to three million people in the former British colony in the wake of the Chinese government’s imposition of a controversial new National Security Law.

Official data indicates the number of foreign citizens registering for a National Insurance number – a measure of how many are starting work in the UK – has fallen sharply in the midst of the coronavirus pandemic and all the associated disruption.

However, Brexit seems to be putting off Europeans more than most – registrations to work in the UK by EU nationals were down 99 percent in the third quarter of 2020 compared with a year ago.

By contrast, the drop in non-EU registrations was just 65 percent.

Where a no deal Brexit would hit hardest (Image: Indeed)

From January 1, the UK will introduce a new points-based immigration scheme, at which point free movement will end.

High-paying jobs, with salaries mostly above the £25,600 visa threshold, in high-skilled sectors such as tech, engineering and finance have witnessed the biggest surge in interest from candidates outside the EU.

Jobs in IT are often highly skilled – and well paid (Image: GETTY)

Between April and October this year, 18 percent of all clicks on UK-based software development jobs came from jobseekers overseas.

Interest from non-EU candidates grew rapidly, and they now account 12.5 percent of all clicks.

On the other hand, the list of the least popular roles for international jobseekers has barely changed in the past year, and is still dominated by jobs in construction, customer service and social care, with the latter, which had an estimated 122,000 vacancies at the start of the year, a particular concern.