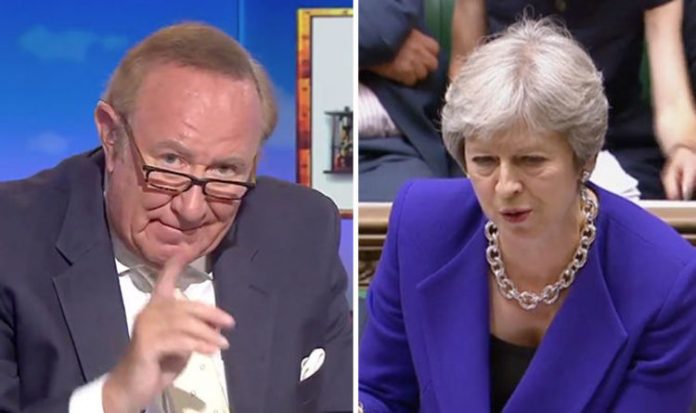 The BBC Daily politics presenter was referring to cabinet resignations and close votes parliamentary votes that could have triggered another general election.

“I will just point out that in any zombie movie I have seen the zombies are pretty hard to kill.”

Mr Neil argued that Theresa May has managed to see off the worst of the “major parliamentary challenges”.

He added: “When you step back from the hour by hour coverage, the closeness of the votes, the arm twisting, the downright skullduggery of the debate, the bottom line is she is through.

“She has got through the debate and she doesn’t face another major parliamentary challenge probably until she brings back some sort of deal from Brussels.”

Mrs May faced claims from her backbenchers of deciding “Brexit means Remain” before Jeremy Corbyn slammed the “war” raging inside the Conservative Party.

Mrs May was confronted by Leave-backing Tory Andrea Jenkyns at Prime Minister’s Questions, with the Morley and Outwood MP questioning why the Government had backed away from its “Brexit means Brexit” approach.

The Prime Minister dismissed the charge before insisting she was seeking a “workable” solution to issues with the EU.

In a rowdy PMQs, Mrs May also accused Mr Corbyn of being “plain wrong” over his interpretation of the Government’s Brexit approach before criticising the Labour leader’s decision to protest against US President Donald Trump.

She also claimed Mr Corbyn sought to “renegotiate the definition of anti-Semitism” while she talked about the future security relationship with the EU, adding: “He protests, I deliver.”

Ms Jenkyns asked: “Can the Prime Minister inform the House at what point it was decided that Brexit means Remain?”

Shouts emerged from across the Commons, before Mrs May replied: “At absolutely no point because Brexit continues to mean Brexit.

“I understand she’s also criticised me for looking for a solution that is workable, I have to say I disagree with her on that – I think what we need is a solution that is going to work for the United Kingdom to ensure we leave the European Union and embrace that bright future.”