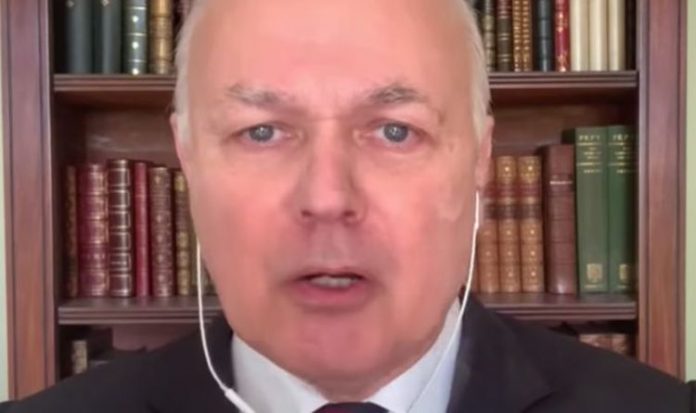 Speaking to Ian Dale on LBC radio, the former Tory leader claimed Brexit talks will eventually expose Brussels’ weakest point of contention. Sir Iain argued this is London’s power over financial services and the importance of eurobonds to be based in the UK to prevent a further collapse of the eurozone. He explained: “The reality is, what is the UK saying they want? They just want what Canada has – a free trade deal with the European Union.

“The European Union has point-blank refused to discuss financial services.

“They don’t want to do that because they want to take back control of the eurobond market.

“But here’s the interesting thing: the only reason why the European Union and the eurozone is not in even deeper trouble is because the eurobond market is in London governed by London’s very powerful regulatory arrangements.

“The moment it moves, it becomes open season.

READ MORE: We WILL walk away! George Eustice sends Brussels into a panic

“They are in debt for such a lot of money because Italy, Spain, Portugal, all these countries have been borrowing money on what they call sovereign bonds.

“But they’re not sovereign bonds because they’re not backed by the central bank and that’s the problem.

“So it’s a complete chaotic mess and that’s going to be eventually exposed.”

Britain’s tortuous divorce from the European Union veered into fresh crisis on Monday after London threatened to undermine the exit agreement unless free trade terms are agreed by next month.

In yet another twist to the four-year saga since Britain voted narrowly to quit the bloc, Prime Minister Boris Johnson’s Government was reportedly planning new legislation to override parts of the Brexit Withdrawal Agreement it signed in January.

That could potentially jeopardise the whole treaty and create frictions in British-ruled Northern Ireland where special arrangements had been made to avoid a hard border with Ireland to the south that could be detrimental to a peace agreement.

Sections of the proposed internal market bill are expected to “eliminate the legal force of parts of the withdrawal agreement” in areas including state aid and Northern Ireland customs, the Financial Times newspaper said, citing three people familiar with the plans.

EU diplomats were aghast, cautioning that such a step – leaked on the eve of new talks in London – would tarnish Britain’s global prestige and heighten chances of a tumultuous final disentangling from the bloc on December 31.

The report was neither confirmed nor denied by Britain.

A government spokeswoman said it would work to resolve outstanding disagreements about Northern Ireland with the EU but was considering fall back options.

“We will always reserve the right to act in the best interests of Northern Ireland and the UK’s internal market,” she said.

“Our top priority is to preserve the huge gains from the peace process and the Belfast (Good Friday) Agreement, as well as protecting Northern Ireland’s place in our United Kingdom.”

Sterling fell against the dollar and euro.