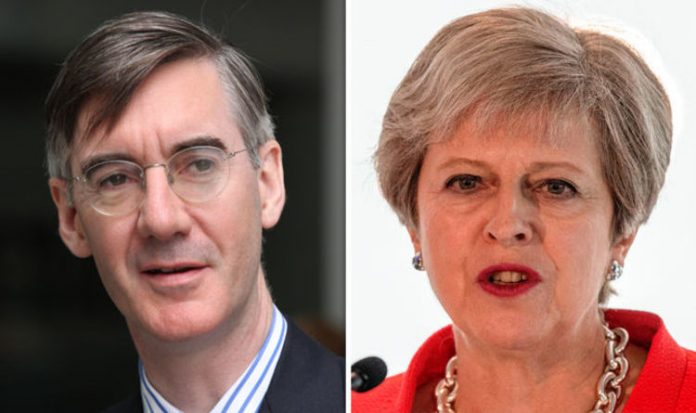 The “chuck Chequers” plans has been drawn up by the European Research Group (ERG) led by hardliner Jacob Rees-Mogg.

They were due to be published in the coming days but was dropped last minute after rows over how much detail to include.

The plans call for the £39billion so-called EU divorce bill to instead be spend on a “Brexit income tax cut”, the NHS and a renewed nuclear deterrent.

A version of the blueprint proposed a Canada-style free trade deal with the EU and if Brussels refused to give the UK would fall back on a “hard-Brexit” governed by World Trade Organisation rules – The Mail on Sunday reports.

Mr Rees-Mogg said last night: “That was an early draft. The key thing which the papers will address is that there is nothing to be concerned about the UK trading with the EU on WTO terms.”

The Canada deal with the EU, known as CETA, removed 98 percent of all Canada duties EU firms had to pay.

Under a hard-Brexit, the UK would pay tariffs on goods and services it traded with the EU – which range from 32 percent on wine to nine on cars.

But Mr Rees-Mogg claims the UK would be able to enjoy ten tariff-free years while a free-trade agreement was negotiated.

The MPs were also going to pledge a “Brexit bonus” by cutting tax.

Income tax, business rates, capital gains tax and stamp duty would be slashed while the UK’s “greater freedom to vary VAT” after Brexit could be exploited by cutting rates on home insulation and domestic fuel, among other things.

But some of the plans would be slightly more controversial, such as a nuclear missile shield to “deter aggression”.

There are also plans for boosting military forces and re-establishing an expeditionary force so the Army “can intervene decisively” in case there is another event like the Falkland invasion.

The revelation comes after Brexiteer Peter Bone made an appeal to “chuck Chequers” as part of the #StandUp4Brexit campaign.

The group argue that the Chequers plan would keep the UK tied to Brussels and make it difficult for Britain to strike overseas trade deals.

Mr Bone said: “I campaigned with people such as Kate Hoey from Labour, Sammy Wilson from the DUP, Nigel Farage from Ukip and David Davis and Liam Fox from the Conservatives.

“I travelled up and down the length and breadth of the United Kingdom, meeting people in towns and villages, who all wanted us to come out of the EU.

“And after weeks of campaigning, it was clear to me that the British people wanted a number of things.

“They wanted us to be able to make our laws, in our own country, judged by our own judges.

“I am determined to deliver that Brexit.

“We need to chuck Chequers and we need to have the Brexit that the British people voted for.”