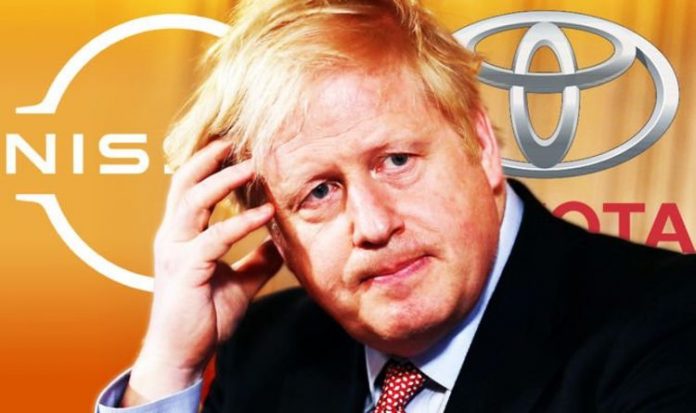 The UK’s chief Brexit negotiator, Lord David Frost, informed UK automotive leaders the EU could now impose taxes on parts imported from Japan and Turkey. Despite being used in British made cars, Brussels has indicated tariffs will be placed on parts even if a deal is agreed between the two sides. In this case, Nissan and Toyota have demanded the UK reimburse the two companies for any additional tax placed on their parts.

Neither company has confirmed the report, although Nissan has urged the two sides to come to an agreement.

A Nissan spokesperson said: “We urge UK and EU negotiators to work collaboratively towards an orderly, balanced Brexit that will continue to encourage mutually beneficial trade.”

Both companies have plants in Derbyshire and Sunderland.

Nissan’s plant in Sunderland has come under sharp focus as it supplies close to 7,000 employees in the region.

However, the company has warned the plant may not be sustainable if there are new tariffs placed on vehicles.

Chief operating officer, Ashwani Gupta, told the BBC the company may need to reconsider its future if additional tariffs were imposed.

He added: “You know we are the number one carmaker in the UK and we want to continue. We are committed.

JUST IN: Coronavirus map LIVE: WHO claims one in 10 people across the world

“Having said that, if we are not getting the current tariffs, it’s not our intention but the business will not be sustainable.

“That’s what everybody has to understand.”

In his letter, Lord Frost refers to the issue of the rule of origin for goods.

The threshold for parts is levelled at 55 percent, meaning that the majority of what was used, must be from the country where it is exported from.

Brexit: The company did not confirm the report (Image: PA)

In his letter, Lord Frost said: “I am sorry to say that so far EU negotiators have neither been willing to discuss these nor share any proposed text with us.

“The commission has made clear that it will not agree third-country cumulation in any circumstances, which we regret, but obviously cannot insist upon.”

The last round of formal Brexit talks concluded last week between Michel Barnier and Lord Frost.

Mr Johnson has set the EU summit on October 15, as his deadline for a deal.

Officials on the continent have indicated the end of the month as a more plausible time.

German Foreign Minister, Heiko Mass, also attended the meeting and warned the UK against taking a no deal Brexit.

He said: “Our door remains open for a close and ambitious partnership with Great Britain.

“That is and will remain our goal.”