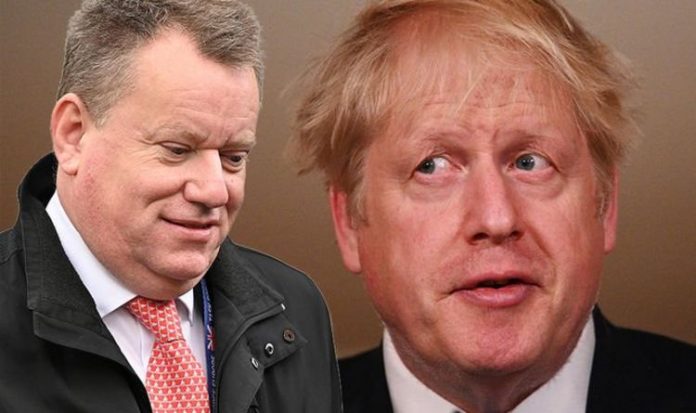 Negotiations on a future trade deal will switch to a virtual format as a member of the EU negotiating team has become infected with coronavirus. After the announcement, the EU’s chief Brexit negotiator Michel Barnier pulled out of a planned debrief of national ambassadors scheduled for today, and will be replaced by one of his senior staff. UK negotiators had been holding talks with the EU team in Brussels since Sunday, with hopes rising that a trade deal could be reached in the coming days.

Talks have been focused on the remaining sticking points of rights for the EU fishing fleet in British waters and the so-called level-playing field.

Despite optimism at the start of November, both sides agree there has been little progress on these fundamental blockages and are preparing for a no deal scenario.

Downing Street insists that Britain is not afraid of leaving the bloc without an agreement.

However, as the clock ticks down, controversial comments made by Prime Minister Boris Johnson in the summer of 2019 have resurfaced.

At the time, Britain was trying to negotiate its withdrawal from the bloc, which was scheduled for October 31.

As he visited farmers in Wales on his tour of the UK, the former Mayor of London suggested it could have taken two years for Britain to leave the single market and customs union.

He described the chance of a no deal Brexit as “vanishingly small” but stressed that the cost of the preparations – such as building new customs facilities – would not be a “wasted effort”.

He said: “Some of the changes and adjustments necessary in the run-up to October 31, and a lot of which we have already done, will be crucial anyway if we are going to come out of the customs union, come out of the single market as we must in the next couple of years.”

Britain did not end up striking a deal before Halloween, and officially left the EU three months later, entering the one year-transition period.

Mr Johnson’s putative “two-year plan” did not come into effect, though.

After winning a landslide majority at the December general election, the Prime Minister made clear he would not ask for an extension to the transition period, which comes to an end in just over a month.

In a recent report, senior economist Harry Western explained why leaving with a deal is not worth it for the UK.

He explained: “The UK currently conducts around 45 percent of its foreign trade with the EU (equivalent to about 13 percent of GDP) so a simple zero-tariff and zero-quota deal would be nice to have.

“But as we have repeatedly said, the difference between a simple trade deal and trading on World Trade Organisation (WTO) terms is not that large.

“In the absence of a deal, UK exporters would face average EU tariffs of about three percent, and UK importers would need to pay tariffs on EU goods that would be a little higher than this.

“By comparison, just before the UK joined the EU in 1972, average tariffs on UK-EU trade were around 11 percent and much higher for many sectors. The average tariff levels of today are quite low.”

Trade economists, Mr Western argued, are always quick to point out that Britain needs to consider non-tariff barriers to trade as well.

This is correct but estimates of these are often exaggerated – figures of 10-20 percent of trade values are often bandied about when something like three percent is much more realistic.

And much more importantly, he added, these non-tariff barriers are going to be there whether there is a free trade deal or not.

He concluded in his piece for Briefings for Britain: “The kind of free trade deal under discussion is not going to reduce non-tariff barriers by much – for goods or for services.

“Crucially, this means a deal will not have much, if any, impact on much-agonised issues concerning managing freight at the UK’s borders.

“So, the UK calculation about deal or no deal is largely about avoiding quite low average tariffs of three percent or so.

“If the quid pro quo for doing so is agreeing a bad deal on fishing that preserves the EU’s incredibly privileged access rights to UK waters and surrendering autonomy over state aid and large areas of regulatory policy it simply isn’t worth it.”