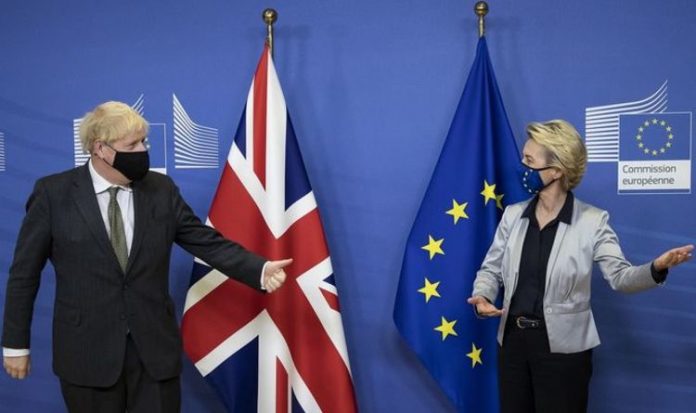 Mr Johnson attended a dinner with the senior EU official yesterday in which they discussed a post-Brexit trade deal with just weeks to go before the transition period ends. The Prime Minister was joined by the UK’s Brexit negotiator David Frost, while Ms von der Leyen was accompanied by Mr Frost’s EU counterpart Michel Barnier.

Ahead of the meeting a picture of the four of them was released.

Labour MP Wes Streeting took to social media to post the photo, and added the caption: “The absolute state of this.”

Mr Streeting did not clarify what about the photo he was referring to exactly, though other users seemed to comment on the officials’ appearance.

She added the UK was a “big step closer” to leaving the EU without a trade deal in place.

A spokesperson for No 10 said talks would continue nonetheless, and that a “firm decision” would be made by Sunday this week on whether a deal can still be reached.

They added: “Very large gaps remain between the two sides and it is still unclear whether these can be bridged.”

Ms von der Leyen echoed the sentiment in her own statement, saying both sides “remain far apart” on their positions.

She added: “We had a lively and interesting discussion on the state of play across the list of outstanding issues.

“We agreed that the teams should immediately reconvene to try to resolve these issues. We will come to a decision by the end of the weekend.”

A no-deal Brexit would mean the UK and EU would begin trading with one another under World Trade Organisation rules.

Critics say this would result in extra tariffs being slapped on certain goods which could harm industry.

Brexiteers argue that a no-deal situation is better than a bad deal which both sides would be forced to adhere to.

Tory MP John Baron told the BBC: “We all want a deal, but it has to be a good deal because, as we’ve said many times before, no deal is better than a bad deal.”