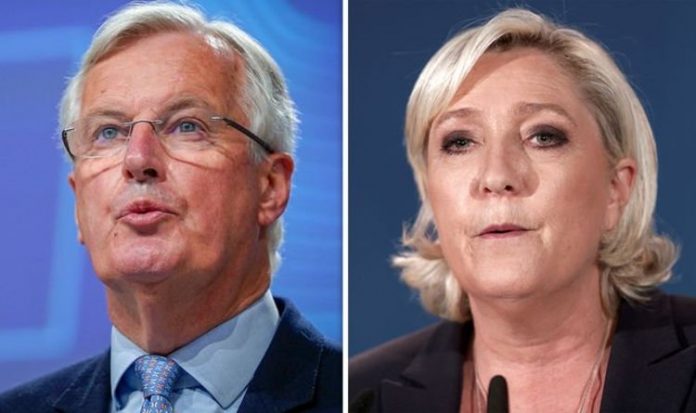 The European Commission President, Ursula von der Leyen, has said a “narrow path” has opened up for the UK and EU to strike a post-Brexit trade deal. As the two sides continue crunch talks in Brussels before the transition period comes to an end on December 31, Ms von der Leyen said she could not guarantee “whether there will be a deal or not”, but added: “The path may be very narrow but it is there.” It comes after talks were extended past a provisional deadline set for last Sunday, with both parties agreeing to “go the extra mile”.

British negotiators are pushing for a “zonal” approach in fisheries discussions, which would allow EU countries only a certain amount of fish from British waters every year.

However, French President Emmanuel Macron was last week accused of souring talks at the eleventh hour, with fresh demands over the EU’s access to British fishing waters.

Mr Macron has vowed to protect French fishermen, who are expected to lose a significant part of their quota from January 1 as part of any Brexit trade deal.

According to senior political sources, because Mr Macron is facing domestic threats to his re-election, he would rather see the talks fail than agree to a deal that could tempt other EU states to leave the bloc.

Europe’s power to protect itself from major global rivals, pandemics, economic crises, migration and climate change will be a major electoral argument for Mr Macron as he gears up for his 2022 re-election bid, most likely against National Rally leader Marine Le Pen, who he defeated in 2017.

Ms Le Pen’s views on Europe and Brexit are in stark contrast with the ones of the French President.

Last year, the eurosceptic politician echoed the anger of many Brexiteers, suggesting the EU was to blame for the deadlock in the talks.

At the time, the two sides were trying to strike a withdrawal agreement.

She told the Anglo American Press Association in Paris: “The European Union is determined to make the Brexit negotiations as painful as possible for Britain to stop other countries following suit.

“I find this anti-democratic and questionable as a strategy.

“The vote has been seen as a catastrophe by the EU but I am for democracy and the vote must be respected.”

Ms Le Pen, who previously supported France leaving the EU before seeming to ditch the idea back in May 2017, also took the opportunity to mention that the British economy was healthier than the French one.

The right-wing leader went on to say that the euro had been catastrophic for the member states that adopted it and that it was terribly planned.

After Brexit day on January 31, Ms Le Pen also added that Britain’s decision to cast off from the bloc was a “failure” for Brussels.

She told reporters in the northern city of Lille: “The United Kingdom has finally regained its freedom. Brexit is a terrifying failure for the European Union.

“The UK has just slammed the door in the EU’s face.

“We will find in the coming months and years that the British made the right decision; that their country will reap great benefits from Brexit.”

While Ms Le Pen lost the vote to Mr Macron with 35 percent to his 65 percent, there are growing fears within the President’s party that this could change in 2022.

Record unemployment in the wake of the coronavirus is expected to be one of Mr Macron’s biggest challenges, and he continues to struggle to shake off his image as an ex-banker elitist out of touch with the everyday struggles of the country’s working class.

According to a poll published in October, around 62 percent of French people admitted to not trusting their President.

The Elabe poll for BFMTV, which asked 1,000 people in France aged 18 and over, also found that nearly half of people (47 percent) think the President is not taking “enough precautions” to limit the spread of the virus.