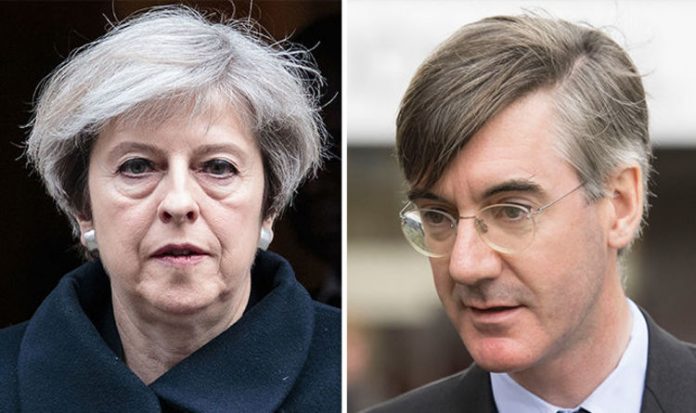 The MPs say they will cancel their coup as soon as Mrs May clarifies her Number 10 exit plan.

They insist they will not rebel against the Prime Minister if she agrees to indicate that she will step aside and leave Number 10 before the next election.

One Tory MP told The Sun: “She needs to chuck Chequers first and then throw us a bone about her own future.

“It does nothing to help her position when aides brief that she intends to stay on to fight the 2022 election.”

“That is not going to happen.”

Despite calls for her to resign, the Prime Minister is determined she will not budge from Downing Street, revealing she is “a little bit irritated” about the continuing debate surrounding her leadership qualities.

But certain Conservatives have threatened to topple Mrs May unless she provides a concrete assurance she plans to leave her post at the Party conference in two weeks.

Before they agree to call off their revolt, the rebel MPs insist May must “chuck Chequers” – the proposal for the EU negotiations thrashed out the Prime Minister’s country residence this summer.

A leadership battle is expected to ensue as career Conservatives jostle for the top job after May’s Number 10 exit.

But Jacob Rees-Mogg, a vocal critic of the Chequers plans, has sung Mrs May’s praises, branding her as “heroic”.

The ardent Brexiteer argued the Prime Minister’s determination and sense of duty gave her “great strength”.

Writing in the Sun on Sunday, he said: “Changing the pilot would not affect the weather.

“It is worth remembering the Prime Minister’s virtues.

“She is determined, thorough and dutiful, and in my view, duty is a heroic virtue.

“This gives her great strength and without a clear Parliamentary majority it is not obvious that anyone else could steer the negotiations to a conclusion.”

Mrs May has expressed her frustration at the discussion about her leadership and said her priority was getting a good deal for the UK.

In a BBC Panorama special, which is due to air tomorrow, she said: “It’s the future of the people in the UK that matters.”