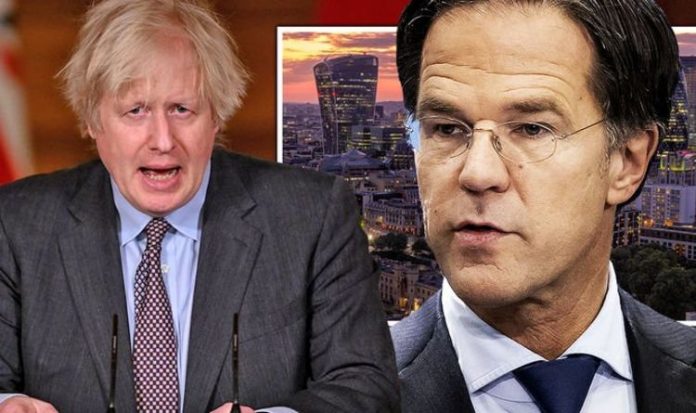 Brexit could lead to seismic changes to Europe’s finance capitals, as Amsterdam’s recent surge appears to indicate. The Dutch capital overtook London as the share trading capital of Europe earlier this month while the UK adjusts to its new life outside of the EU. The city’s share trading volumes quadrupled to average £8billion per day in January. At the same time, average volumes in London fell sharply to £7.4billion last month. This shift comes after the EU refuses to recognise London’s equivalence – meaning EU-institutions are banned from trading in London post-Brexit.

Prime Minister Boris Johnson and his Government are hoping to regain regulatory recognition and bring European business back to Britain.

However, Brexit has also sparked concern in the EU – namely the Netherlands – despite Amsterdam’s recent gains.

Michiel Bakhuizen said: “Before we start becoming euphoric about this, Brexit is not good for the Netherlands.

“In the end, the Netherlands has lost their second trading partner.”

While Amsterdam has enjoyed a boost in the immediate aftermath of Brexit, some experts don’t believe London will be displaced as a key financial centre in Europe.

Barclays CEO Jes Staley said the UK’s departure from the EU will prove to be a net benefit for the City of London.

“There are some jobs that are going to Europe that otherwise would have been in the UK, but it’s in the hundreds.

“Some amount of capital has moved but London is still obviously the main centre for Barclays.”

Bloomberg commentator and former chief markets strategist at Haitong Securities in London, Marcus Ashworth, also highlighted that the EU still has a large stake in the City.

He said: “Brussels is concerned that three-quarters of euro-denominated derivatives are traded and cleared in London, along with nearly half of euro currency trading.

“That’s understandable. But for Europe to create its own self-sustaining market, it needs to think about what clients — such as London’s prized ecosystem of hedge funds — want rather than obsessing about market infrastructure or where investment banks are opening subsidiary offices. In short, it needs to follow the money.”

As the row over financial services continues between the EU and UK, Andrew Bailey, governor of the Bank of England, urged Brussels to grant equivalence to the UK in a speech earlier this month.

DON’T MISS
Brexit threatens EU unity: ‘Now we are alone with France!’ [INSIGHT]
EU bust-up as Macron and Merkel ‘ran off in bad mood’ [ANALYSIS]
Brexit: French figure told UK ‘get out of EU before you wreck it!’ [INSIGHT]

He said: “The public goods of open economies, an open financial system and the stability of that system are global, not regional, in nature.

“The UK is one of the world’s largest global financial centres, and its financial stability – as the IMF reminded us – is therefore a global public good.”

He said: “I think there is a widespread narrative in the UK that there will be somehow a negotiation about financial services, but I don’t see that happening.

“Equivalence, as the Joint Declaration (attached to the Brexit trade deal) made extremely clear, is not a negotiation, equivalence is a unilateral decision.”