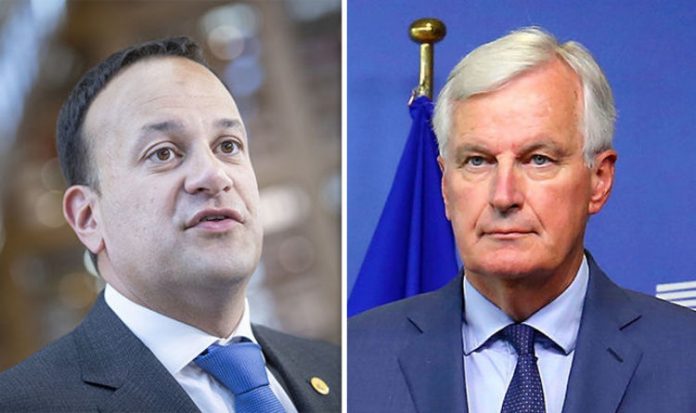 His denial came after reports emerged Revenue Commissioners and Government officials were working together to draw up plans for a hard border with full customs checks.

Even before the UK joined the EU there was no hard border between the UK and the Republic of Ireland as part of the common travel area agreement.

Responding to the speculation, Mr Varadkar said: “The direction we’ve given to Revenue is not to prepare for customs posts on the land border between Ireland and Northern Ireland because that’s something we’re not contemplating.”

He added: “If the Revenue Commissioners are in any way trying to put in any physical infrastructure then that is news to me and I really don’t believe that’s happening.”

The Irish leader’s comments may help defuse fears spread by remainers and EU allies that in a no-deal scenario, a hard border is inevitable.

Former Prime Minister, John Major, warned in May a “physical border seems unavoidable” if the UK fails to agree a trade deal with Brussels.

Meanwhile, Joachim Pfeiffer, a close ally of Angela Merkel in the German Bundestag, has claimed a no deal would lead to Ireland having “the hardest border in Europe”.

He argued there would be “a border like we have a border with Ukraine or Belarus”.

Mr Varadkar said he could not see a hard border materialising, even in the event of a no deal scenario, because neither country wanted such an outcome.

He said: “I am confident that no matter what happens, the common travel area will remain in place because both UK and Ireland want that for each other’s citizens.

“It benefits citizens in both countries and the European Union has taken the view that we can continue that.”

However, he also explained he remained hopeful a deal could be agreed between the two negotiating partners in the coming months.

Both the UK and Brussels have remained optimistic about achieving trade agreement in time for Britain’s departure from the bloc after March next year.

Last week a senior source told the Express there has been a “marked change of attitude” from the EU negotiators who have taken a much more “pragmatic” approach.

The source added: “There is a narrative that nothing will be agreed before November but we believe we can get this done and dusted by October”.

The source noted: “If they [the EU] show the same imagination, energy and drive as we have brought to the table then we can get a deal done.

“We are seeing signs of that now.”