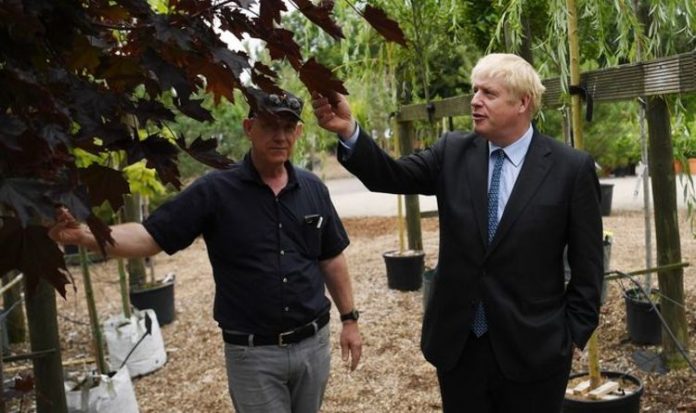 It comes as plant nurseries have complained of issues with trade as European law now prohibits the UK from selling plants to either Northern Ireland or the continent if they have any traces of soil on them. A trade body has warned this is restricting exports, and has called for regulation to be reviewed.

In 2019, the value of the UK’s ornamental horticulture trade, which includes cut flowers, was put at £76 million.

One plant nursery, the Yorkshire-based Johnsons of Whixley, has claimed it fears losing as much as £500,000 a year due to the soil ban in particular hitting sales to Northern Ireland.

The Northern Ireland trade barriers have come up since the country has remained part of the bloc’s plant health system, the BBC reports, even though it is part of the UK.

The Department for Environment, Food and Rural Affairs (Defra) told Express.co.uk this is because, under the Northern Ireland Protocol, the island of Ireland is treated as “a single epidemiological unit”.

Now, James Barnes, chairman of the Horticultural Trades Association, has called regulations “overly-restrictive” and said the industry has opportunities to benefit from Brexit.

He told Express.co.uk: “The Government must ensure the trade of plants and seeds are included in not only the NI Protocol negotiations, but in wider discussions with the EU on how British plant sellers can export easily and with minimal red tape to buyers in Europe.

The EU’s plant and soil rules are designed to prevent soil diseases from entering the EU.

At the same time, Sam McBride, an analyst for pro-Unionist Northern Ireland news outlet News Letter, has said the island of Ireland and Great Britain have been trading plants with soil for “centuries”.

Robin Mercer, who owns the NI-based Hillmount garden centre, told the outlet: “I fear for our fourth generation family-run garden centre business. Like many others we’re on the brink of collapse through no fault of our own.”

Defra told Express.co.uk: “We are working closely with the horticulture industry to ensure they can take advantage of the opportunities leaving the EU brings, and overall businesses are adjusting well to the new rules and continue to trade effectively.

“Alongside other measures, we have put in place the Movement Assistance Scheme (MAS) to support and assist traders moving plants, plant products, and agrifood from GB to NI – meaning that businesses do not face new direct costs from certification requirements.”