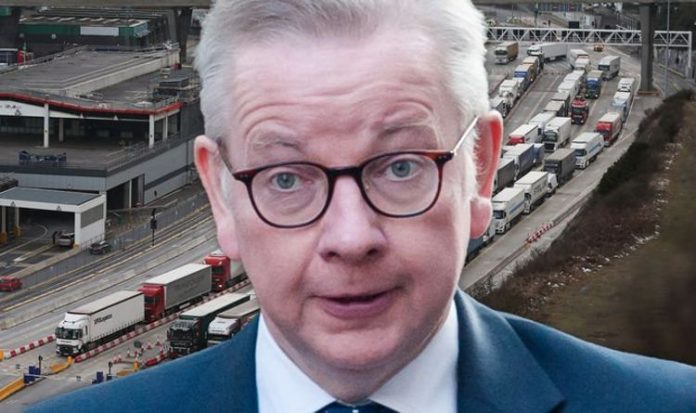 There are fears a no deal outcome will result in massive queues as lorries and other vehicles wait to get into Dover. Additional customs restrictions between the UK and EU border mean journey times could be severely delayed. Michael Gove has laid out plans for how the Government want haulage firms to operate from January.

Access permits will only be issued to lorries with the paperwork required to continue into EU territory.

The system, being called the ‘Kent passport’, on social media, will be enforced by police with the aid of number-plate recognition technology.

On Wednesday Mr Gove warned there could be queues of up to 7,000 lorries 60 percent of which may lack the required paperwork to enter the EU.

He said: “What we want to do is avoid the level of congestion that this reasonable worst-case scenario sets out.”

In a response to a question on lorries from local MP Damian Green he added: “they don’t have the material required, then it will be the case that through policing, ANPR cameras and other means, we’ll do our very best to ensure that his constituents are not inconvenienced.”

Mr Gove warned there could be delays of up to two days for cargo travelling between the UK and France from January.

Currently Britain is in a Brexit transition period during which many of the EU’s rules and regulations continue to apply.

However, this concludes at the end of this year so London and Brussels are negotiating to try and agree a new trading arrangement.

However, Mr Gove insisted the Government is looking to secure a deal commenting: “We’re absolutely determined to do everything we can to avoid no deal.”

He admitted only 24 percent of British businesses currently think they are ready for a no deal exit whilst 43 percent expect the transition to be extended.

Mr Gove admitted a no-deal exit is now plausible “if our neighbours decline to be pragmatic”.

Separately Shankar Singham, a Brexit backing trade negotiator close to the Government, suggested a new ‘implementation period’ could be introduced for when the transition period comes to a close.

Speaking to MPs he said: “The issue is a political deal be done in the time, then there can be implementation periods and specific periods to cover ratification, but no one is going to talk about this right now because we are still in a negotiation.

“If a political deal is done by even the end of the year, no lawyer in the Commission, or no legal process, is going to get in the way of finding a solution.”

However, Mr Gove appeared to rule out this possibility on Wednesday.

Boris Johnson argues the controls this deal requires between Northern Ireland and the rest of the UK are an infringement on British sovereignty.