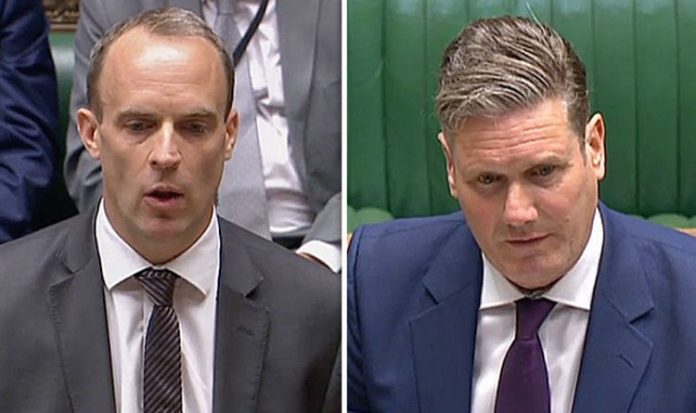 Brexit Secretary Dominic Raab claimed the Labour Party would be “useless” in standing up for the UK in negotiations with the EU.

Responding the Labour’s shadow Brexit secretary in the House of Commons, Mr Raab also criticised Labour for “dangling the prospect of a second referendum”, which he claimed would only invite the worst kind of deal from the bloc.

During his speech, the Brexit Secretary updated MP’s on negotiations with the European Union claiming he was “confident that a deal is within our grasp”.

He said: “It’s being attacked from all quarters. Something has to give. Time is running out. The October summit is 44 days away.

“It is impossible to see how the Chequers proposal could lead to a deal which could command a majority in Parliament in that time. The Brexit negotiations are in serious trouble.

“It appears that the Government’s strategy is to plough on regardless, to pretend everything’s going to plan, to hope that somehow the dynamics of the negotiations and the arithmetic in this house is going to magically change. That is incredibly irresponsible.”

He said: “As for the honorable gentleman. Well, last week he said that Labour’s position is that a second referendum is on the table.

“I have to say Mr Speaker, it is rare that I agree with the shadow trade secretary who said the second referendum would be damaging to the foundations of this country. But I think in democratic terms, he is right about that.

“I am afraid it shows how frankly useless the Labour Party would be if they ever got in charge of Government, in terms of standing up for the United Kingdom in these negotiations.

“Because, nothing could be calibrated to weaken the UK’s negotiating position more than dangling the prospect of a second referendum, which would only invite the very worst terms.

“On the technical notice, we are doing the responsible thing that any responsible Government would need to do. Striving for the very best deal but preparing for all outcomes.

“The honorable gentleman has actually not asked me any question of substance about any one of the 25 notices we have published.”

Over the weekend Prime Minister reiterated she would stand by her controversial Chequers blueprint adding that she would not compromise if it is “not in our national interest”.

The Prime Minister was however placed under pressure from the former foreign secretary after Boris Johnson ripped into the Chequers plan in his column for The Daily Telegraph.

Mrs May’s spokesman responded by saying: “Boris Johnson resigned over Chequers. There’s no new ideas in this article to respond to. What we need at this time is serious leadership with a serious plan and that’s exactly what the country has with this Prime Minister and this Brexit plan.”