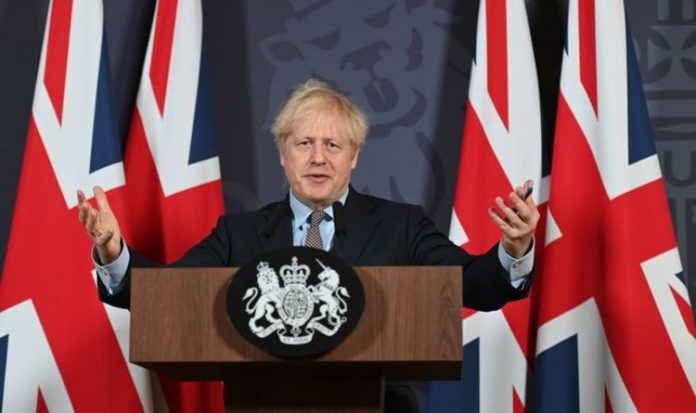 In the coming days MPs are due to be provided with the full text of the 2,000-page Brexit deal agreed between UK and EU officials on Christmas Eve. It will then go to a vote, with the aim of being ratified before the December 31 deadline.

Boris Johnson hailed the deal yesterday as “the basis of a happy and successful and stable partnership with our friends in the EU for years to come”.

However, remainers on social media have joined calls for a ‘re-join’ movement, including anti-Brexit MEP Guy Verhofstadt.

He took to Twitter to urge young Britons to “demand to rejoin soon” after it was revealed the UK would be leaving Europe’s Erasmus student exchange programme under the deal.

Mr Verhofstadt also said: “I hope our future UK politicians will build on this partnership so we can regain the close relationship [we] deserve.

“It will be a first step in the return of the UK into the European family.”

One Brexiteer blasted the EU official, writing: “It’s just a shame you couldn’t handle today’s news with the good grace some of your EU counterparts could.”

He claimed to be “unhappy … about some of the detail” but called it a “big moment”.

Mr Farage added: “This victory is a tribute to the ordinary men and women who stood up against the Westminster establishment – and won.”

Details of the Brexit deal that negotiators on either side of the channel have agreed are yet to be published.

Mr Johnson has sought to focus on the UK having taken back control since the agreement was announced in the early afternoon of Christmas Eve.

He said in a press conference: “We have taken back control over every jot and tittle of our regulation in a way that is complete and unfettered.”

He also said the “jurisdiction of the European Court of Justice will come to an end”.

Some other rough details of the Brexit deal are already known, including the aforementioned exit of Erasmus university exchange programme.

The deal assures tariff- and quota-free access to the EU market while the UK will have to comply with UK and EU trading standards.

According to The Guardian, there will be an end to mutual recognition of professional qualifications, meaning doctors or architects will have to seek state-by-state recognition.

It is also reported that UK-based TV broadcast providers will no longer be able to offer services on a pan-European basis.

And the UK will no longer be part of the European Arrest Warrant system, but cross-border law enforcement can continue.